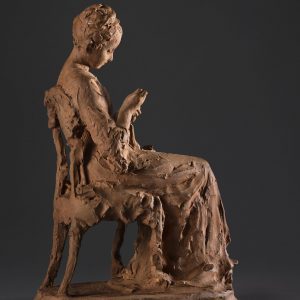 “A charming and original thing is The Embroideress by M. Jules Dalou, a student of Carpeaux: this is a young woman in modern dress, seated in a chair, and doing needlework. The pose absolutely accurate, and the feeling of the whole of the figure is exquisite; the breast breathes, the skirt drapes itself elegantly. ‘But is this sculpture, is it not rather painting!” exclaimed Jules Castagnary when he saw the original, life-size plaster model of The Embroideress, exhibited successfully by Dalou as no. 4401 at the Salon of 1870 and awarded a third prize medal.

Fully within the “Realist” movement, which intended to build a picture of “social reality” taking everyday life as its point of departure but using all the means of history painting, Dalou’s modernity all comes from the fact that he was the first French sculptor to present a life-size, contemporary Embroideress at the Salon of 1870.

Of the emblematic sculpture, as important for the rest of his work as it was in the eye of the public, aside from an old photo of the life-size plaster version, only the small draft version in patinated plaster, done after the fired terracotta in the Dreyfous collection (H 29 x 24 x 17 cm. Paris, Musée du Petit-Palais, inv.: PPS01271) for which Hébrard made several bronze versions by contract to Dalou’s heirs, 31 January 1907, a terracotta (H. 31.5 cm. London, Victoria & Albert Museum, inv. : A 37-1934) as well as several smaller bronze versions like that in the Musée de Mont-de-Marsan (H : 67.5 cm. Inv. : MM 82.12.1) exist. Of a very much smaller size, the two first drafts—the one in the collections of the V&A Museum and that of the Petit Palais—suffer by comparison with the one that we are presenting. By their dimensions, the former appear to be stouter, of a more cautious composition, and rather removed from the lightness and the pure moment of grace that Dalou allows us to see here in this never before published masterpiece.