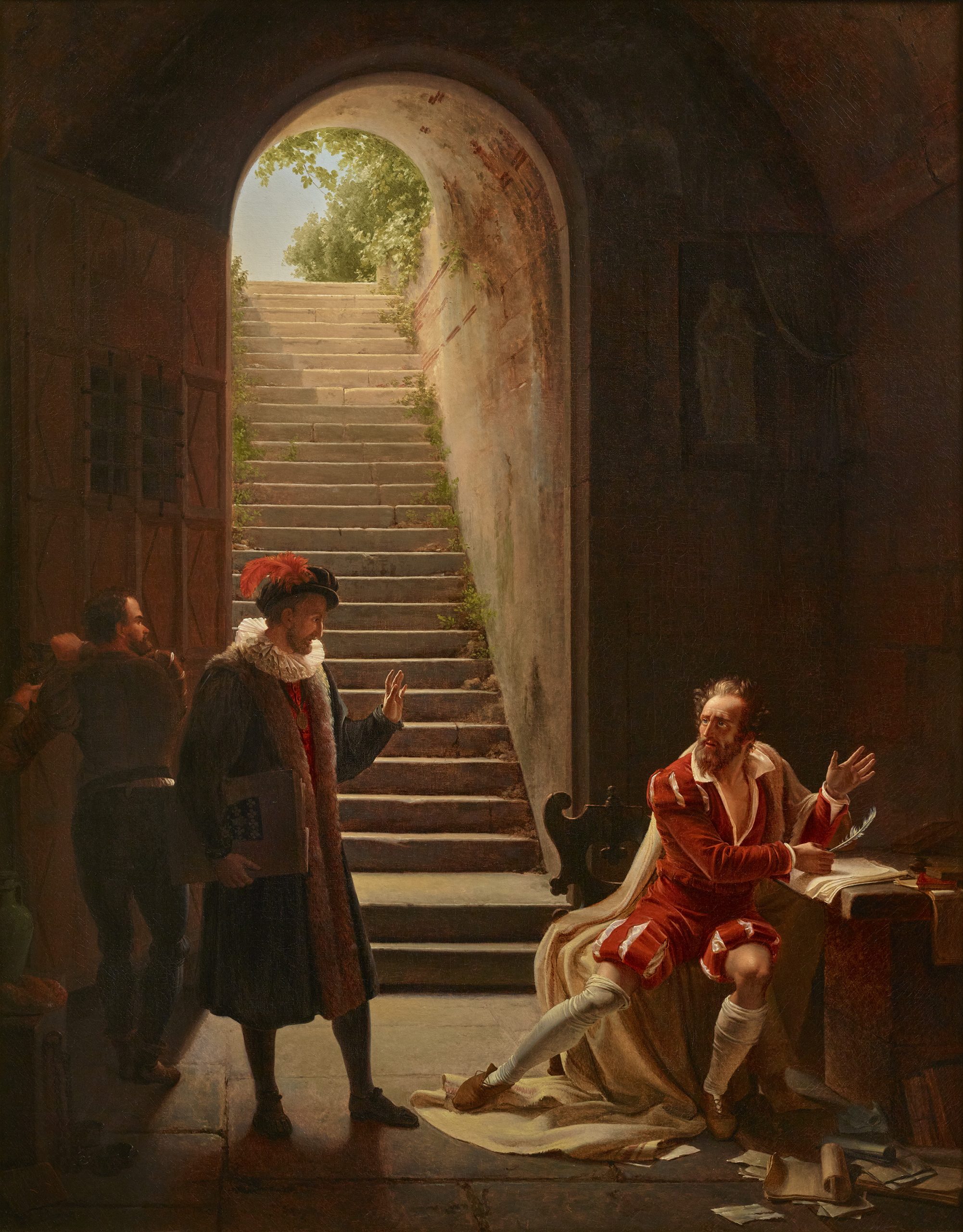 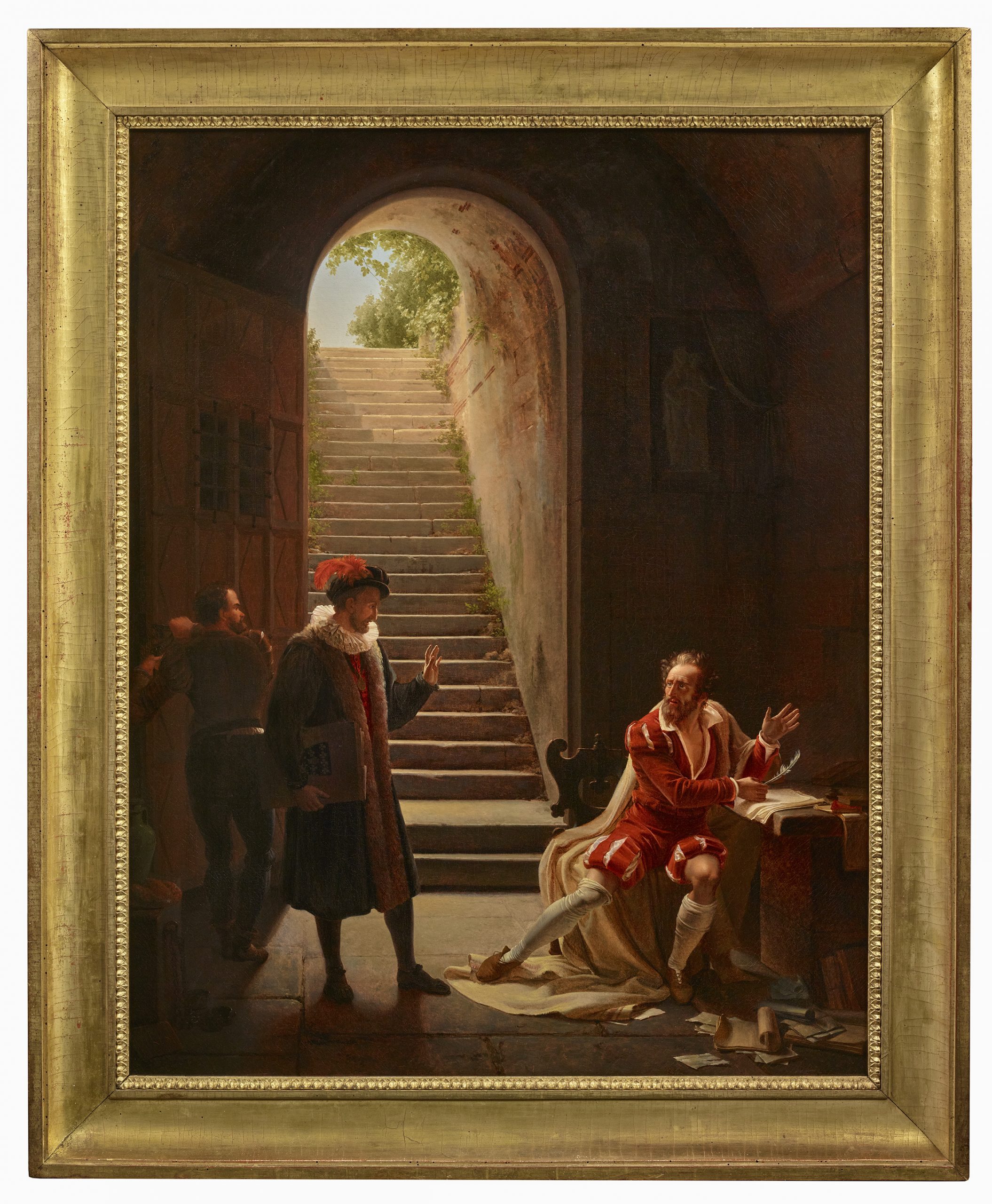 Having chosen the stairwell of the crypt of the Lyon Church of Saint-Irenaeus, Richard depicts the meeting of  Michel de Montaigne (1533-1592), Humanist, Philosopher and author of  Essais and Le Tasse (1544-1595), genius and poet, author of Jérusalem délivrée, locked away for a time for madness by the Duc de Ferrare. The scene took place in 1581, at the Hospice Sainte-Anne, “I felt more distress than compassion to see him in such a pitiful state…” wrote Montaigne after his visit. Le Tasse continued writing with constancy and passion, having been allocated spacious quarters by the duke after a few months where he could continue to work and receive visitors.

Richard show us a tormented genius, his hose inelegantly sagging, looking at his visitor as if he were a hallucination, agitated but continuing with his work. The dazzling beauty of the slashed doublet he wears is evidence of his status as a courtier and gentleman. Montaigne’s more sober outfit and the—surprised but measured—gesture with which he greets his friend, contrasts with Le  Tasse’s lunacy and flamboyance.

The originality of the way the scene is laid out, with the flight of stairs leading the eye of the viewer toward the outer world, the care given to details, vegetation and fabrics, the subtlety of the study of the effects of light, from raw daylight to the darkness of the crypt, and the beauty of the still life in the foreground,  are evidence of the care taken by Richard in his work. The version that is today in the collections of the Musée des Beaux-Arts in Lyon was commissioned by the Comte de Schönborn who had to abandon his project subsequently because of a misunderstanding. Our canvas—equal in quality—was probably executed at the same time by  Richard, who wished to keep a version of his composition for himself.

Biography : Fleury Richard, along with Michel Grobon and Pierre Révoil, was one of the founders of the “École Lyonnaise.” Beginning in 1789 he took courses at the École de Dessin in the city, where he was trained in flower-painting, directly related to the silk industry, one of Lyon’s major industries. He arrived in Paris in  1795 and was accepted the following year to study in David’s studio where he was to remain for three years. His work was much appreciated by the Imperial family as, in the years from 1805 to 1810, Josephine bought seven paintings from him for her gallery at Malmaison and named him Peintre de Sa Majesté. Her daughter, Queen Hortense also purchased canvases from Richard, such as his Mademoiselle de La Vallière (Arenenberg, Musée Napoléon), and copied some of his works. In 1814, Richard received the title Peintre de Monsieur and, in 1817, that of Peintre de Son Altesse Royale. He worked a long time, from 1817 to 1819, on the only official commission he received Tannegui Duchastel Saving Le Dauphin for the Gallery of Diane at Fontainebleau (still in place).

His role as a teacher at the École des Beaux-arts in Lyon occupied an important place in his career, since he was the successor to Révoil, attaining the rank of Professor, and serving in that capacity from 1818 to 1823. Struck down by illness in 1824, he stopped painting to devote himself to writing his Souvenirs.

His work is limited since the meticulousness of his brushwork and the demanding nature of his personality lead him to privilege formal perfection over the quantity of paintings he produced.

Having turned to painting stories drawn from Antiquity in David’s studio, Richard joined with some of his fellow students—Granet, Forbin, Révoil—to form a separate group, passionate about the medieval period and French history. He frequented the Musée des Monuments Français, and plunged into the study of medieval literature and manuscripts.

At the Salon of 1802, he exhibited the first “troubadour” painting, Valentine de Milan. The term “troubadour” had at first been reserved for literary works that were pastiches of the poetry of the Middle Ages. Afterwards it came to include all works having medieval subjects painted during the first half of the 19th century.

Critical opinion at the time of Fleury Richard was more likely to evoke painting that was “anecdotal” or “chivalrous” to correspond to this genre: born in the early years of the century to end with the consecration of Romanticism and the success The Massacre at Chios by Delacroix (1824).