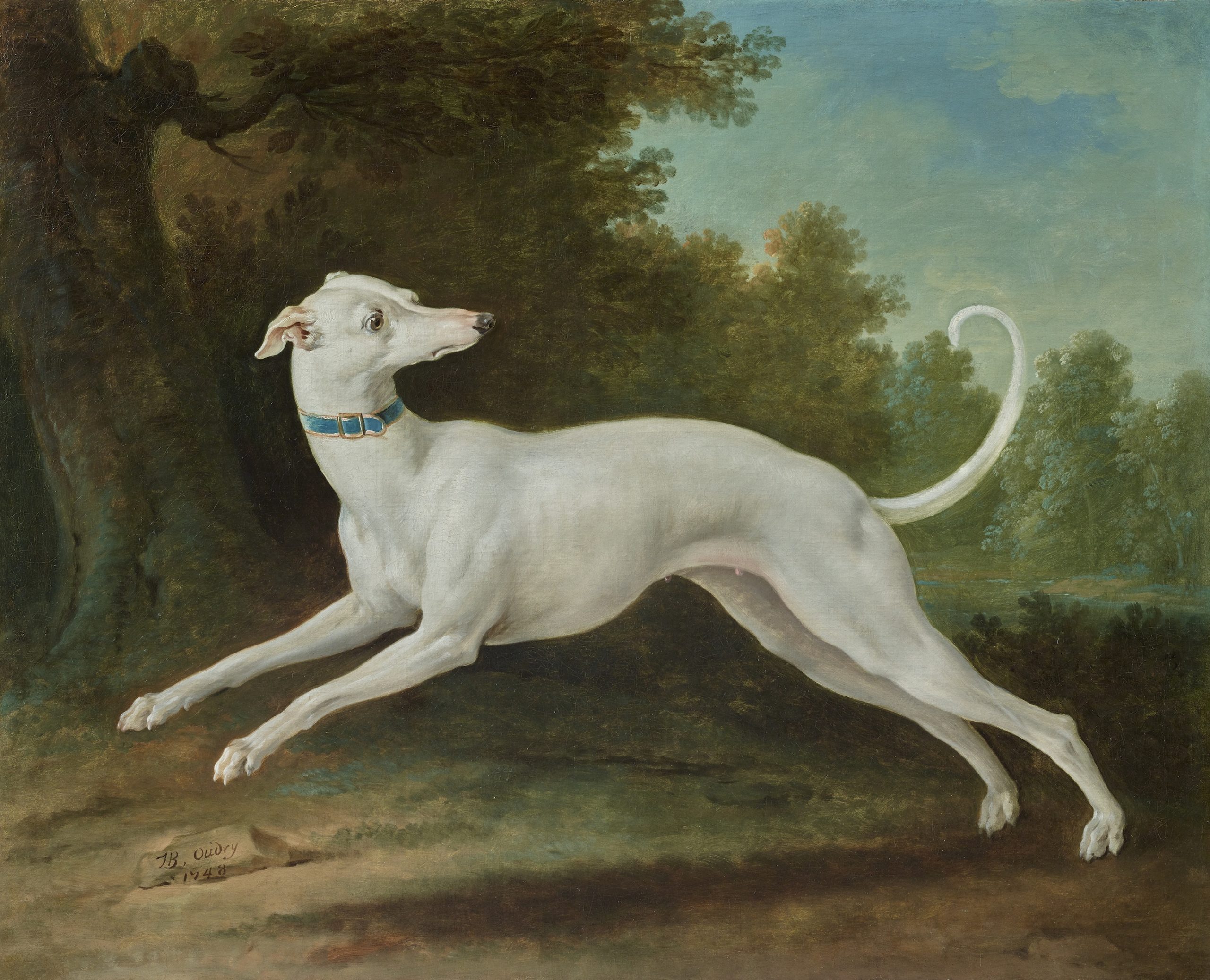 Jean-Baptiste Oudry was one of the most prolific and most accomplished artists of his time.. Oudry practiced all kinds of genres in painting, but he reached the summit of his fame during the reign of Louis XV with his paintings of animals and hunting scenes.

His paintings include many hunting scenes, exotic and domestic animals, landscapes, portraits and still lifes. He was both a history painter and a genre painter, and also was a talented illustrator and the author of numerous series of models for tapestries. Oudry was presented to the young Louis XV by the Marquis de Beringhen, First Equerry to the King. The king then named him Customary Painter to the Royal Hunt.

Our painting, representing a female greyhound in a landscape, carries on this tradition of representations of dogs in the form of veritable individualized portraits as it existed in aristocratic and bourgeois families, thus relaunching a genre that went back to the Italian Renaissance. The canine portrait had already been introduced into the French Court by Desportes under Louis XIV and continued during the reign of Louis XV. At the request of the king, Oudry executed a famous series of portraits of the females in his pack, intended to decorate the royal apartments at the Château de Compiègne. Louis XV’s greyhounds were depicted against landscapes, accompanied by their names in gold letters, for example Misse et Turlu (1725), or Polydore, chien de la meute royale (1726); both paintings are at National Museum of château de Fontainebleau. Here, the identity of the young greyhound and her owner are unknown, but one recognizes in this animal all of the distinction of a hunting dog belonging to a person of high rank.

Here the object of the portrait wears a sky blue collar, edged in gold thread, echoing—with a skillful use of bluish touches blended with various tones of greens and browns—an elegant landscape showing a forest and a luminous sky. The position of the dog, its weight on its back legs and head turned toward the left, allows us to compare it to the painting showing Misse and Luttine (National Gallery, Washington, Inv. 1994.53.1) painted by Oudry for the king in 1729.

As in the series of portraits that he did of Louis XV’s dogs, in this painting Oudry applies himself to describing the head of the animal and its expression, precisely re-transcribing a morphology that blends elegance and strength. The painter captures the movement of the dog in motion, her muscles tensed. Her smooth white coat allows him to underline the lines of her delicate, powerful musculature, emphasized by a sensitive use of light and shadow. The painter here was able to render the great expressivity of the dog in its bearing. The treatment of the head and its rendering are precise, in both the dog’s coat and the animal’s expression. This work, dated 1748, confirms the widespread development of canine portraits among the elite, continuing the tradition of royal commissions.