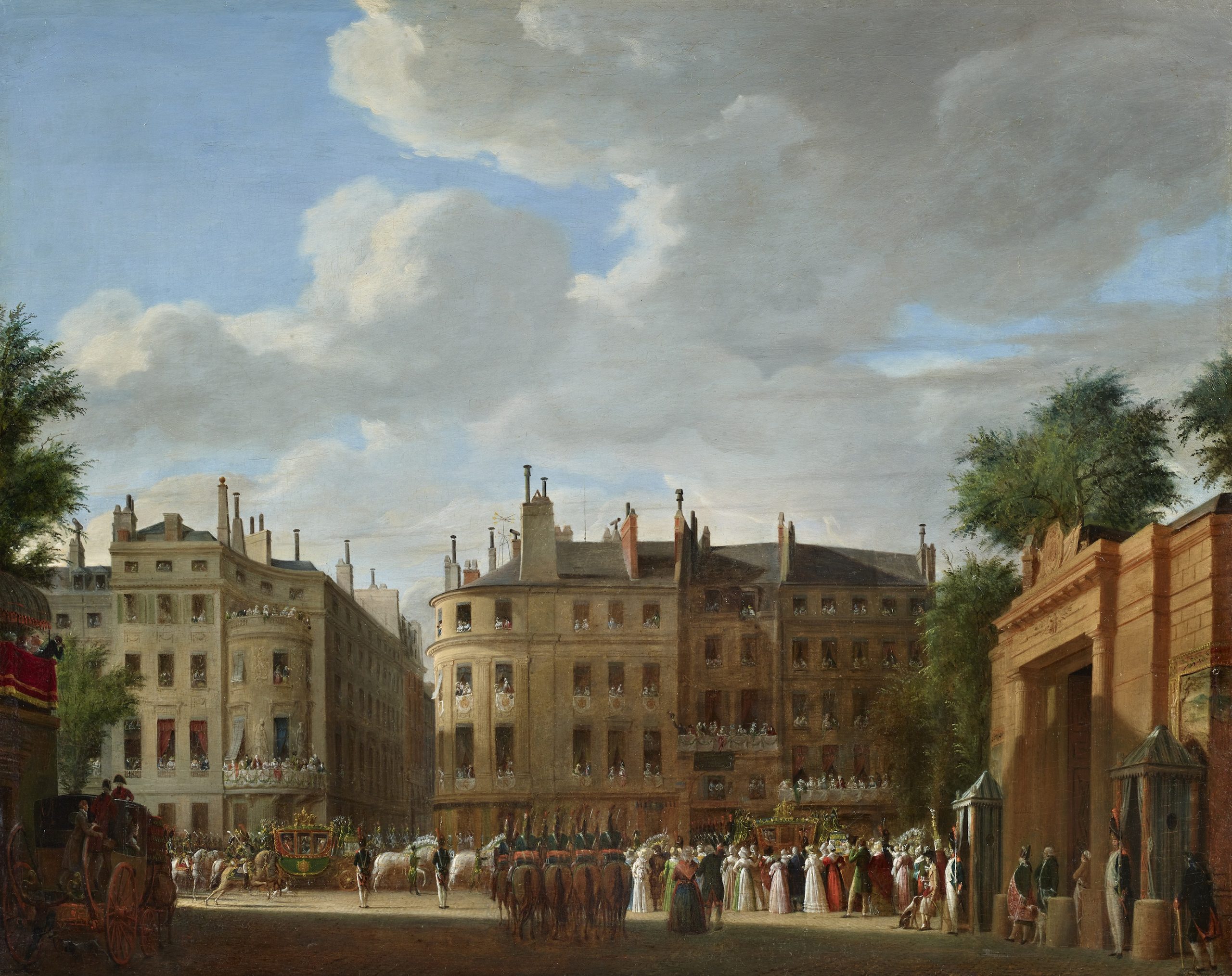 The birth of a male child, on March 20th 1811 at the Tuileries Palace, to the couple Napoleon and Marie-Louise of Austria, assumed considerable political importance, since it ensured that the Emperor had an heir, and the government a successor. The Imperial Prince was given the title King of Rome at birth.

Our painting depicts the passage of the Imperial coach—recognizable by its coat of arms and glittering equipage, as well as by the size of its escort—as it passed below the bunting-draped windows of some of the most beautiful dwellings of the capital. Situated at the angle of the Rue de Caumartin and the Boulevard de la Madeleine, the Hôtel Marin-Delahaye was a mansion built in 1779 for a Fermier Général who transformed its vast roof-terrace into a garden wonderland, complete with pyramid, a Chinese bridge, arches of trellising and brooklets delivering water to the dining and bath rooms of the building. The building still stands today, as does the one opposite, to the right of the Imperial berlin, the Hôtel d’Aumont, property of a French peer who had enthusiastically embraced the principles of the French Revolution. Bedecked with flags for the great occasion, the balconies swarm with a large, enthusiastic crowd, where Garneray‘s charming sense of the picturesque is served by his brushwork, its precision worthy of a miniaturist.

In the foreground of the composition, an imposing doorway, guarded by Grenadiers de la Garde, gives us perhaps an indication of who commissioned our painting. This is the entrance of Colonnade House, built in 1726 at the angle of the boulevard and of the Rue des Capucines, for Legendre d’Armini, Director of the Compagnie de Saint-Domingue, and brother-in-law of Antoine Crozat. The Parisian residence of Dupleix, Governor of the Etablissements de l’Inde, the house then became the property of Septeuil, First Valet to Louis XVI, before being confiscated in 1793. It was then allocated to Bonaparte, who had recently been named general, commanding the Army of the Interior after the royalist insurrection, which took place in front of the Church of Saint-Roch, had been repressed. This was where he was living when he married Josephine on March 9th 1796.

But as of 1807, the mansion with its vast garden overlooking the boulevard, belonged to the Prince de Wagram, Maréchal Berthier. It was to this latter, a Major Général de la Grande Armée, that Napoleon had confided the task of representing him in Vienna for his marriage by procuration to Marie-Louise on March 11th 1810.

It was in the elegant, aristocratic and fashionable Paris of the Grands Boulevards—the luxurious urban cityscape that served to inspire Boilly and Isabey—that Garneray situated and painted with meticulous virtuosity one of the essential dynastic episodes of the First Empire, then at the summit of its glory.