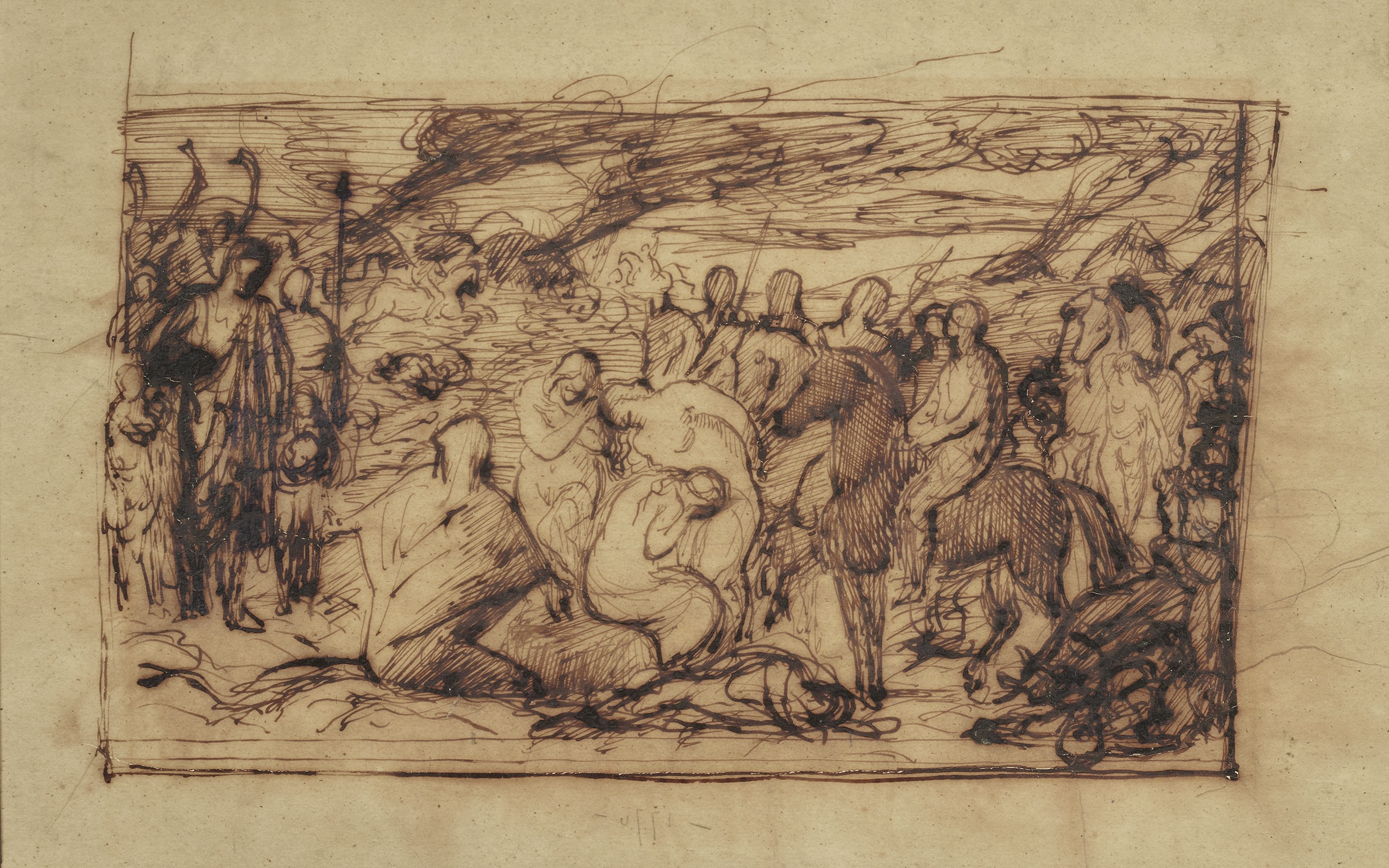 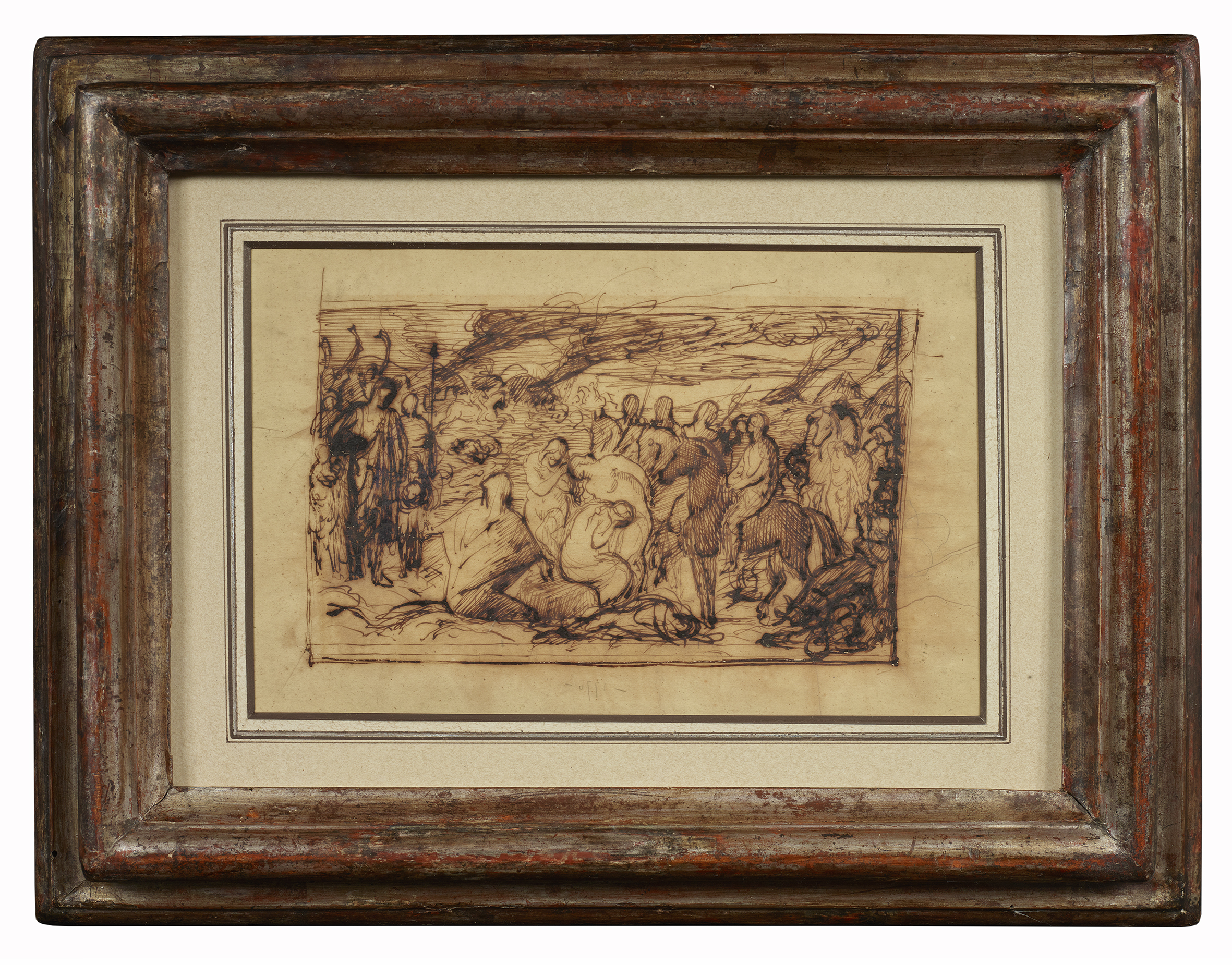 Issued from a bourgeois family in Lyon, Pierre Puvis de Chavannes’s vocation as a painter came relatively late. Having received a solid classical education at the Lycée Henri IV, he spent a year in the studio of Henri Scheffer, before meeting Delacroix through his friend Bauderon de Vermeron. Only a few weeks after entering Delacroix’s studio, the young Puvis began studying in that of Thomas Couture, before installing his studio at the Place Pigalle in 1852. Influenced by the frescos painted by Chassériau for the Cour des Comptes, he resolved to turn to painting murals and completed his first decorative series, Return of the Prodigal Son and the Prodigal Son and the Four Seasons for his brother in Brouchy.

Long refused entry to the Salon, Puvis was finally able to exhibit there in 1861. From it, the State acquired Concordia (Peace) for the Amiens museum. Puvis de Chavannes then began his career as a great decorator, receiving several important commissions: for the Palais de Longchamp in Marseille (1869), the Hôtel de Ville in Poitiers (1874), the Panthéon (1874) and the Hôtel de Ville in Paris (1891). Inspired by the decorative murals of the Italian Renaissance, Puvis de Chavannes painted large allegorical compositions with an impressive economy of means. He founded his art on the harmony of the composition, and on line, which he used to construct figures that he intentionally refused to contour, and worked in shades of muted monotones. Puvis de Chavannes’s production of drawings was impressive, not only in terms of the number of drawings he did, but also by their variety, as underlined by Marie-Christine Boucher in the exhibition catalogue devoted to the artist by the Musée d’Amiens in 2005-2006.

Our study, never before on the market, is the artist’s initial of what “Bellum” (ill. 2),  exhibited at the Musée de Picardie in Amiens, should look like.  While the work is today part of a monumental décor including  Concordia,  Rest, Service to the Nation, Work, Play for the Nation, and finally Workers (Ave Picardia Nutrix), it was not created for the museum.

Concordia and Bellum, the two allegories of Peace and War, were executed by Puvis and presented at the Salon of 1861, the year he first participated after several years of refusals.  This is where the critics first discovered the artist and his works, praised for the modernity that they brought to the Salon. In particular, Théophile Gautier wrote, “This young artist, in a time of prose and realism, is naturally heroic, epic and monumental.” (Abécédaire du Salon de 1861,  p. 103-104). It was Arthur-Stanislas Diet, the new architect of the plans for the Musée Napoléon (renamed the Musée de Picardie in 1878), who had spotted the two paintings at the Salon.  The creation of the museum was very important, since its ambition was to be a Louvre for the region to promote French art, and these two very large canvases found an ideal place there. Rest and Work, presented at the Salon of 1863 joined them there when they were acquired by the State. Other allegories were then created to complete the décor of the museum, with additions in 1864, 1865 and lastly in 1882.

Our drawing was the artist’s first idea for the work, executed with rapid, nervous penwork in brown iron gallate ink. Extremely dramatic and detailed, its figures practically entangled with one another, the work is particularly powerful for its rather modest format, especially considering the size of the composition on canvas in Amiens. The almost complete absence of bare space in the central drawing is counterbalanced by a border featuring military attributes—absent here, but meant to appear in all the paintings. The border of Bellum was unfortunately eliminated, to the great dismay of Puvis.

Here, Puvis de Chavannes chose to represent not battle itself, but the dramatic  consequences of war: death, pillaging, fire, anguish and desolation. If he simplified his final composition, making it lighter and placing the scenes in the middle ground further back to allow the composition to breathe, he retained all the groups first sketched in our work: the trumpeters on horseback, a father and mother on their knees before the corpse of their son, captives—a man on the ground and three young women with their hands bound—wounded animals, and fires everywhere in the background. But while they were kept, the groups were often moved around the composition, with Puvis adding a dead tree, symbol of the  desolation of nature, to the oxen in our drawing.  This is also true of the trumpeters, on the left in our drawing, and given a much more central place in the final canvas.

Puvis de Chavannes executed replicas of his four emblematic works,  Rest, Work, and Bellum and Concordia, rechristened  War and Peace in order to constitute a coherent decorative series. He presented them at the Exposition Universelle of 1867. War and Peace are today in the collection of the Philadelphia Museum of Art (Inv. 1062 et 1063).