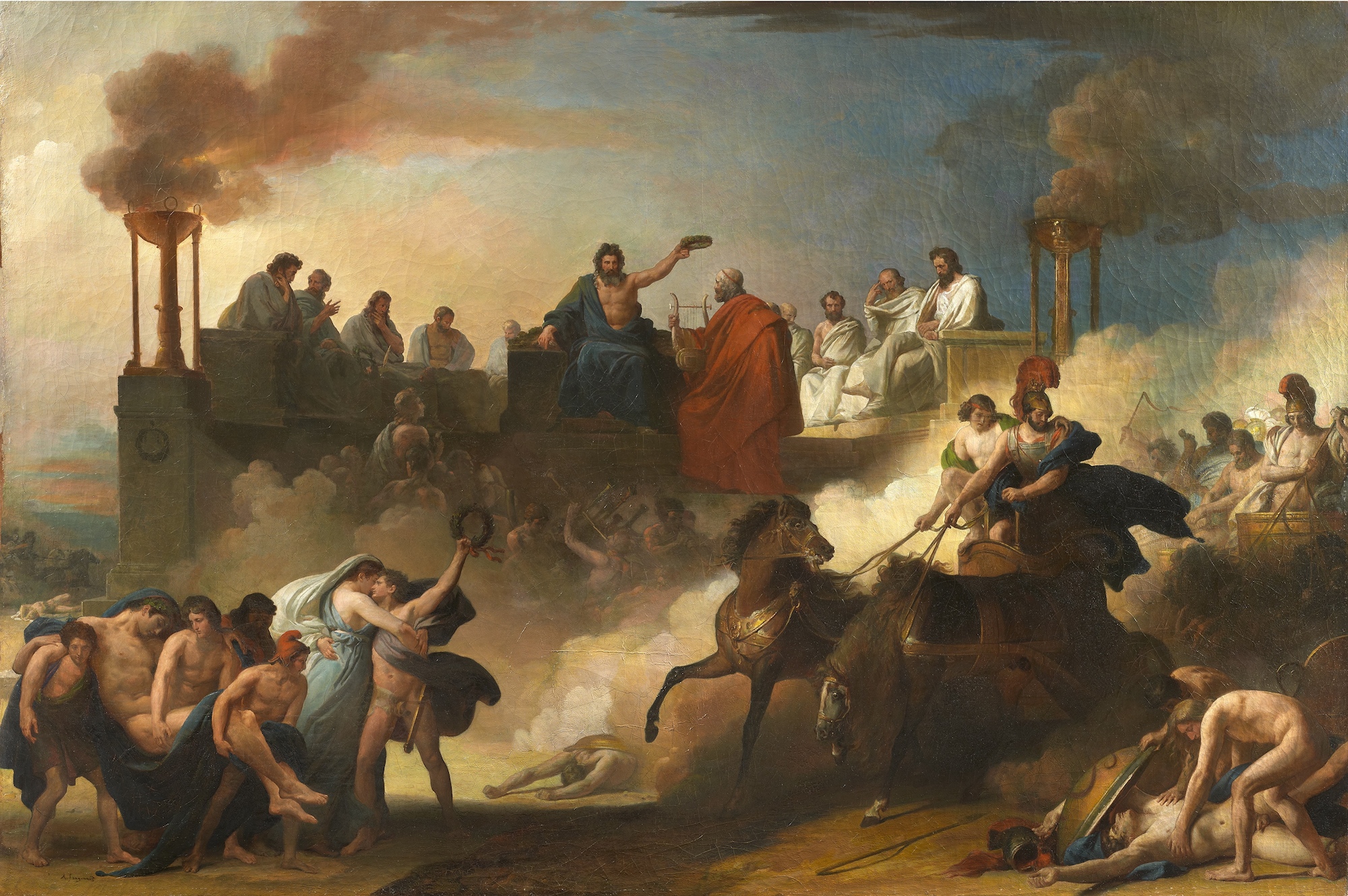 Alexandre-Evariste Fragonard, whose ambitious, dramatic and dynamic compositions always set him apart from the precious, virtuoso meticulousness of the Troubadour style, mixed different episodes from the Trojan War here, in a vast scene peopled by several dozen figures.

Homer is represented holding the lyre of the aedes (poets of ancient Greece) as Zeus crowns him, consecrating his literary glory to the pantheon of geniuses of the ancient world. Seated in a semicircle around the king of the gods and the prince of letters, are the wise men of Antiquity, philosophers appearing to debate Homer’s merit and lend their support to his coronation.

Among the various scenes are two superimposed in the foreground: the death of Hector, principal defender of the city and son of Priam, the Trojan King, and the embrace of Paris and Helen, whose kidnapping caused the conflict.

The dust of the battle ground blurs into the smoke from the braziers, while the winded horses of Achilles’ chariot are proof of the violent tumultuousness of the fighting.

The body of Patroclus, his companion, is seen in the foreground, stripped of his armor, while the body of Hector—dragged three time around the walls of the city by Achilles—lies on the ground at the center of the composition.

We do not know who originally commissioned our painting. Was there only a single picture? The classical theme of this ambitious work seems anachronistic to a period when the most fashionable themes dealt with the history of the French nation, and where the Middle Ages and the Renaissance had eclipsed Antiquity as a setting. AE Fragonard, who exhibited for the first time at the Salon of 1793, seems to have revisited themes from the beginning of the century, when the artists born of the Revolution and working during the Empire relied almost exclusively on Greek and Roman heroes.

Was the idea his, or did he take it up at the demand of a patron who was nostalgic for the period and for Classical culture? We are unable to answer this question at present.

Dating the work is also a problem, for it was clear during the restoration of the work—altered to some extent by the use of bitumen-based black pigments, used frequently by neoclassical painters, Prud’hon in particular among them—that there were two quite distinct periods during which Alexandre-Evariste Fragonard worked on it. Several of the figures are much more finished and detailed—those of Homer and Zeus among them—while others are treated more schematically, with brushwork that could almost be termed Romantic in its greater reliance on dramatic effects and billowing clouds than on line or drapery, as illustrated by the group of musicians at the feet of Zeus, accompanying the coronation of the poet.

It is thus possible to speculate that the painting was begun in the 1830s and only later brought to its present state by the painter.