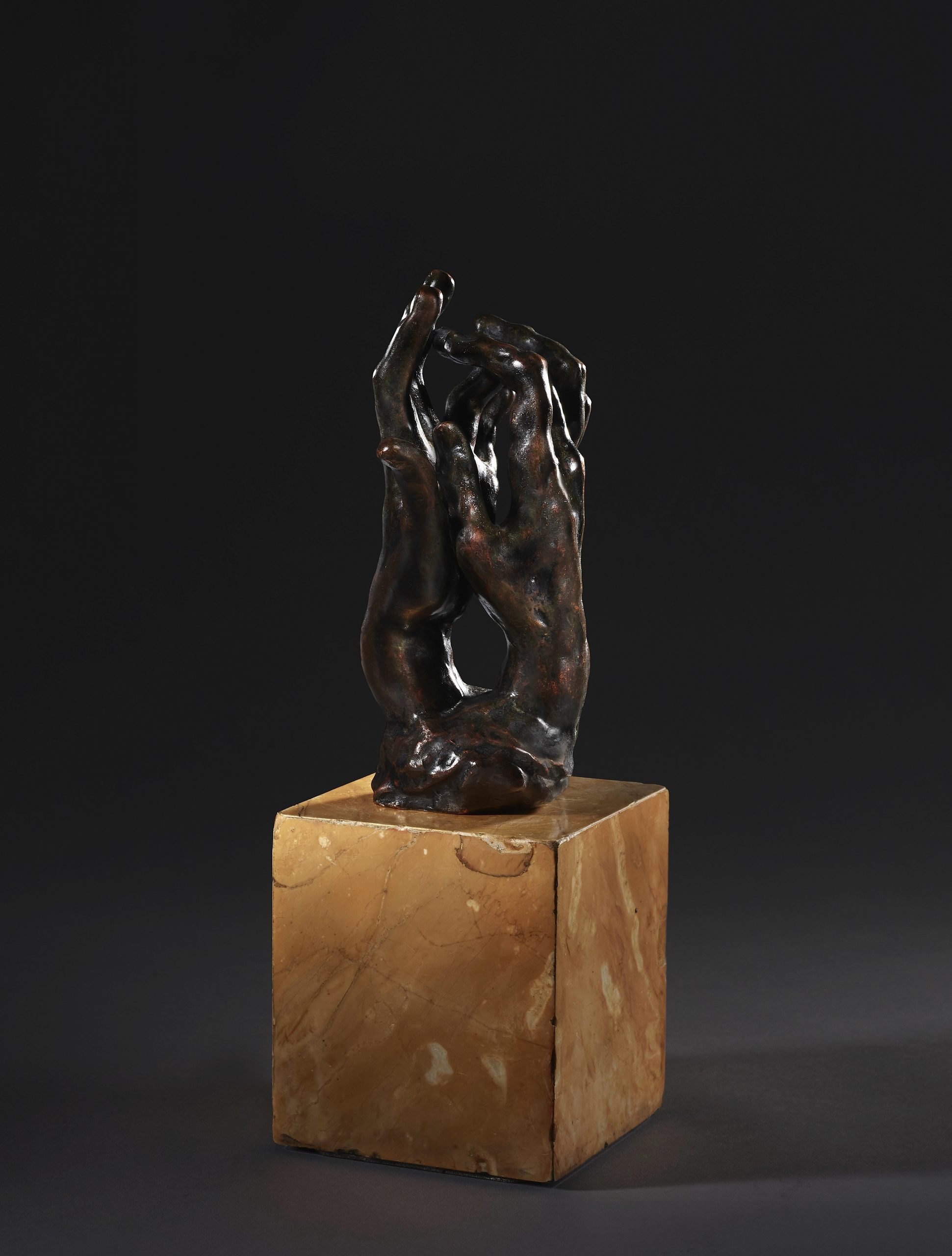 (1840-1917)
Assemblage of Two Hands
Study for The Cathedral
Bronze with brown patina
15 x 9 x 6,2 cm
Signed : A. Rodin
Bears the number : 4/12 and the museum stamp
Conceived in 1900 and cast in January 1944
Sand cast
Provenance : Musée Rodin, Paris; Minet collection (acquired from the above, 1944); Private collection; Drouot, Gros & Delettrez, 08.III 2018; Private collection, France
Our Assemblage of Two Hands, also known as Study for The Cathedral is part of the series of “hands as monuments” done by Rodin in the years from 1890 to 1910.

Fascinated by the endless expressivity  of this part of the body, which, once isolated, become autonomous, taking on a life of their own and becoming subjects in and of themselves,  Rodin created several major works: The Cathedral, The Secret, The Lovers’ Hands, God’s Hand, and The Devil’s Hand. In all of them, like faces, hands reveal every emotion; the smoothness of marble confers softness and serenity, whereas bronze, on the contrary, reinforces dramatic intensity, accentuating the tensing of muscles.

Like tiny fragments of works from Antiquity—an endless source of inspiration over the centuries—these small models were kept by Rodin; the sculptor reworked them,  distorting and magnifying them until they attained the expressiveness or the spirituality he was seeking (see Hélène Marraud, La main révèle l’homme, exhibition catalogue, Musée Rodin, 2005). In the same way, the play of light and shadow as much as the space at the center of the work were particularly interesting to, and studied by the artist. In his Lettres à Rodin, Rainer Maria Rilke wrote, “The way that air participates has always been of a great importance for him.” (1928).

As so often, The Cathedral was not given its title until later, almost certainly in connection with The Cathedrals of France, published by Rodin in 1914. “The cathedral is a synthesis of the country (…) Rocks, forests, gardens, the Northern sun, all this is shrunk into this giant body; all of our France is in cathedrals, just as all of Greece is in the Parthenon.” (Auguste Rodin, Les Cathédrales de France, 1914).

In his book, the artist himself made the analogy between the ogival vaults of cathedrals and the shape of hands joined in prayer. In the final work, however, we do not see praying hands: the artist created his composition with a right hand (no. 30) and a left hand (no. 2), but used two right hands facing each other in the finished version.

While numerous editions of Secret have appeared on the market  during the last twenty years, studies for the Cathedrals are rarer.

Only a single proof of our composition is to be found in a public collection, in the Museum of Fine Arts in Buenos-Aires (Inv. 7766, sand cast by Alexis Rudier).

Our bronze is particularly well documented since it is accompanied by the certificate signed by Grappe, curator at the Musée Rodin, after it was cast for the museum (fig. 4). As mentioned in the certificate, it was Eugène Rudier, son and successor of Alexis Rudier, who executed the bronze. The foundry, which scrupulously respected his techniques, continued to mark its work with the signature “Alexis Rudier” until the death of  Eugène, in 1952.

Our bronze is also accompanied by a receipt from the Musée Rodin from the first sale of the work to a private collector, Monsieur Minet, domiciled at 34 rue Washington in Paris, on 11 August 1944.