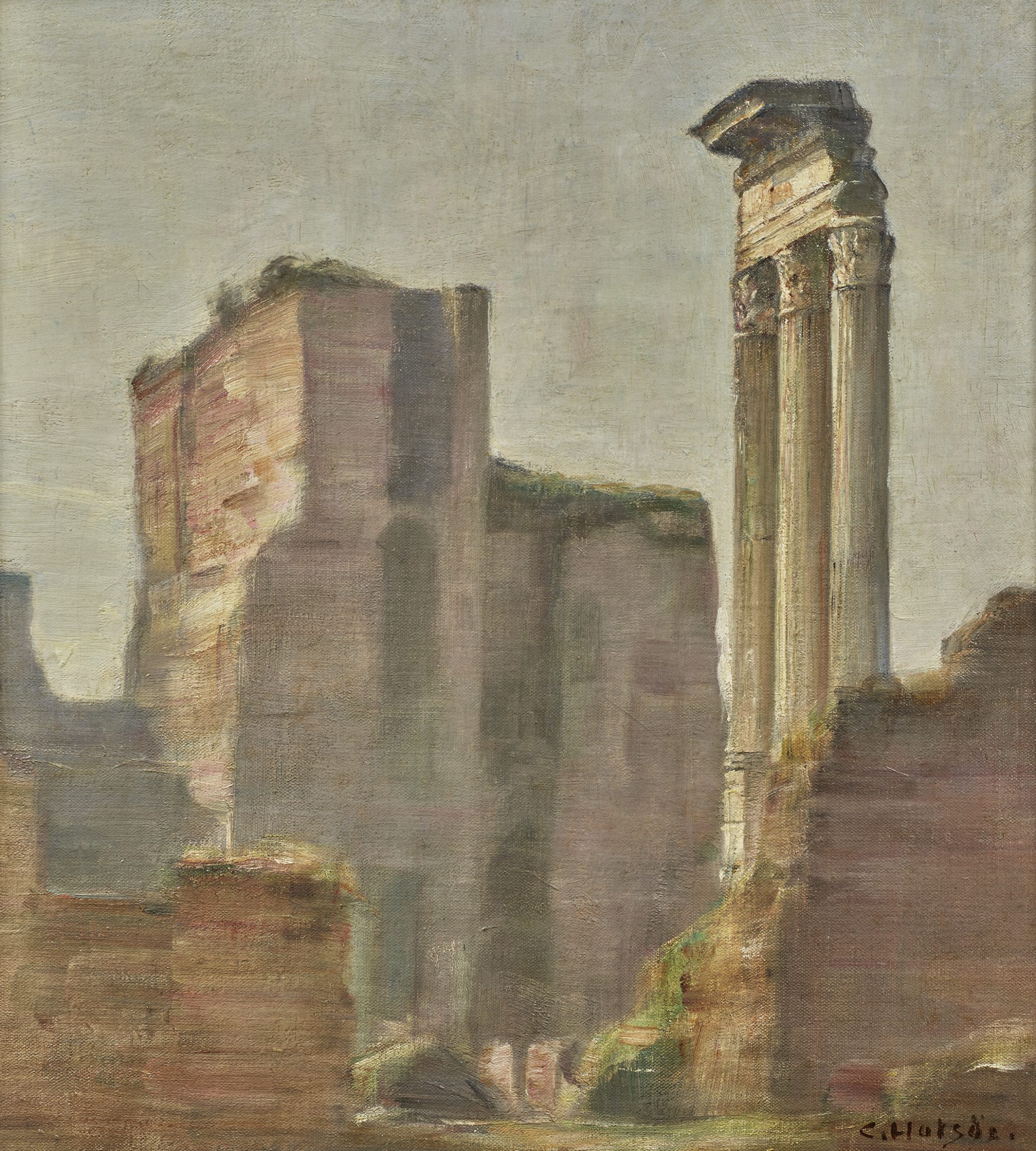 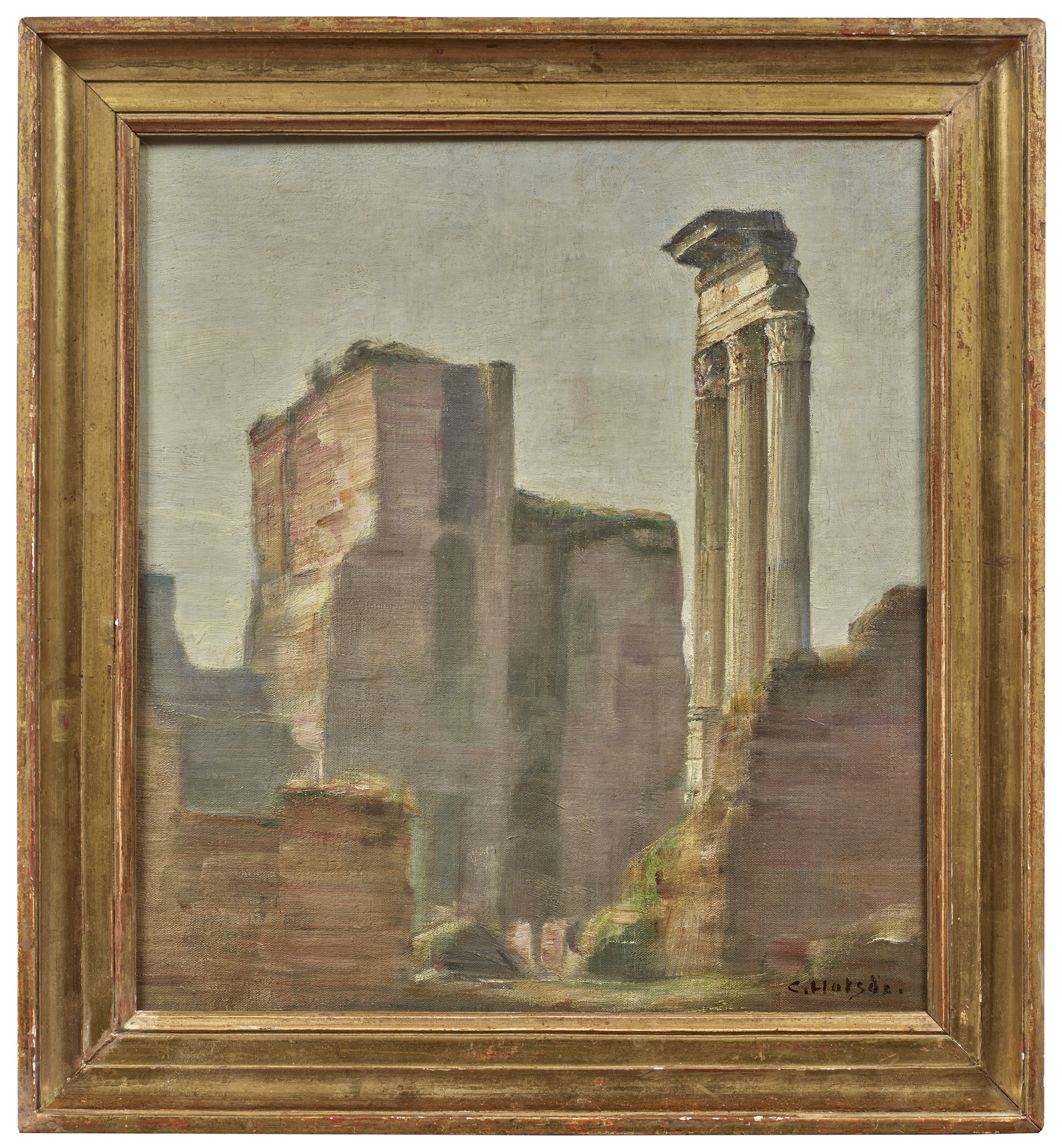 The Temple of the Dioscuri and the Horrea Agrippiana

Our elegant view of the Roman Forum is an invitation to enter into the work of Carl Vilhelm Holsoe. One of the greatest artists of the Danish School in the late 19th and the first decades of the  20th century, Holsoe began his apprenticeship at the Royal Academy of Painting in Copenhagen, where he studied from 1882 to 1884. Subsequently, in the company of Vilhelm Hammershoi and Peter Ilsted, he was taught by Peder Severin Kroyer at the Kunsternes Studieskole.  The three artists, who remained close thereafter, became Scandinavia’s most famous painters of interior scenes.When Holsoe made his professional debut at Charlottenborg, in 1886, Karl Madsen wrote that it “seemed almost to be a manifesto.” Already, his incredible sense of light, inherited directly from the artists of the Dutch Golden Age, like Vermeer and  de Hooch, was a huge success.

Holsoe’s interior scenes, in which time seems to stand still, invite day-dreaming and contemplation. They sometimes feature a female figure, the artist’s wife and muse, Emilie Heise  (1868-1930), who married Holsoe in 1894. The expression on her face is only rarely seen—the viewer seemingly surprising the young woman as she goes about her everyday life, without her paying any attention.

While Holsøe executed numerous interior views of an intimist nature like this latter, landscapes are extremely rare in his corpus. A few views of Denmark are known, executed at the beginning of his career and of a facture that is still very classical, and they join a limited number of mountain landscapes and views of Lake Geneva.

It was in 1897, thanks to a scholarship, that Holsøe left for Rome, and did his first modern landscapes. These are recognizable by their slightly blurred aspect, an effect that would be seen later, especially in the work of artists like Gerhard Richter.

Only two other Roman landscapes by the artist are known today, a View of the Pincio Foutain  (Galerie Paolo Antonacci, Rome, 2017), and a composition that is very similar to ours, in which the Temple of Castor and Pollux rises in the middle of the canvas (present whereabouts unknown). The latter is signed and dated 1898, leading us to suppose that our painting also dates from this year.

Our canvas, which is almost square-shaped, as was frequently the case for Holsøe, and was probably executed just after the first canvas, a reworking of the same subject in a much more balanced composition. On the right, rise the famous three columns of the Temple of the Dioscuri, Castor and Pollux, built under Augustus, in 33 B.C, while in the center are the ruins of the Horrea Agrippiana, a large building built to store the seed and grain sold in the forum. Both of these can still be seen at the forum.