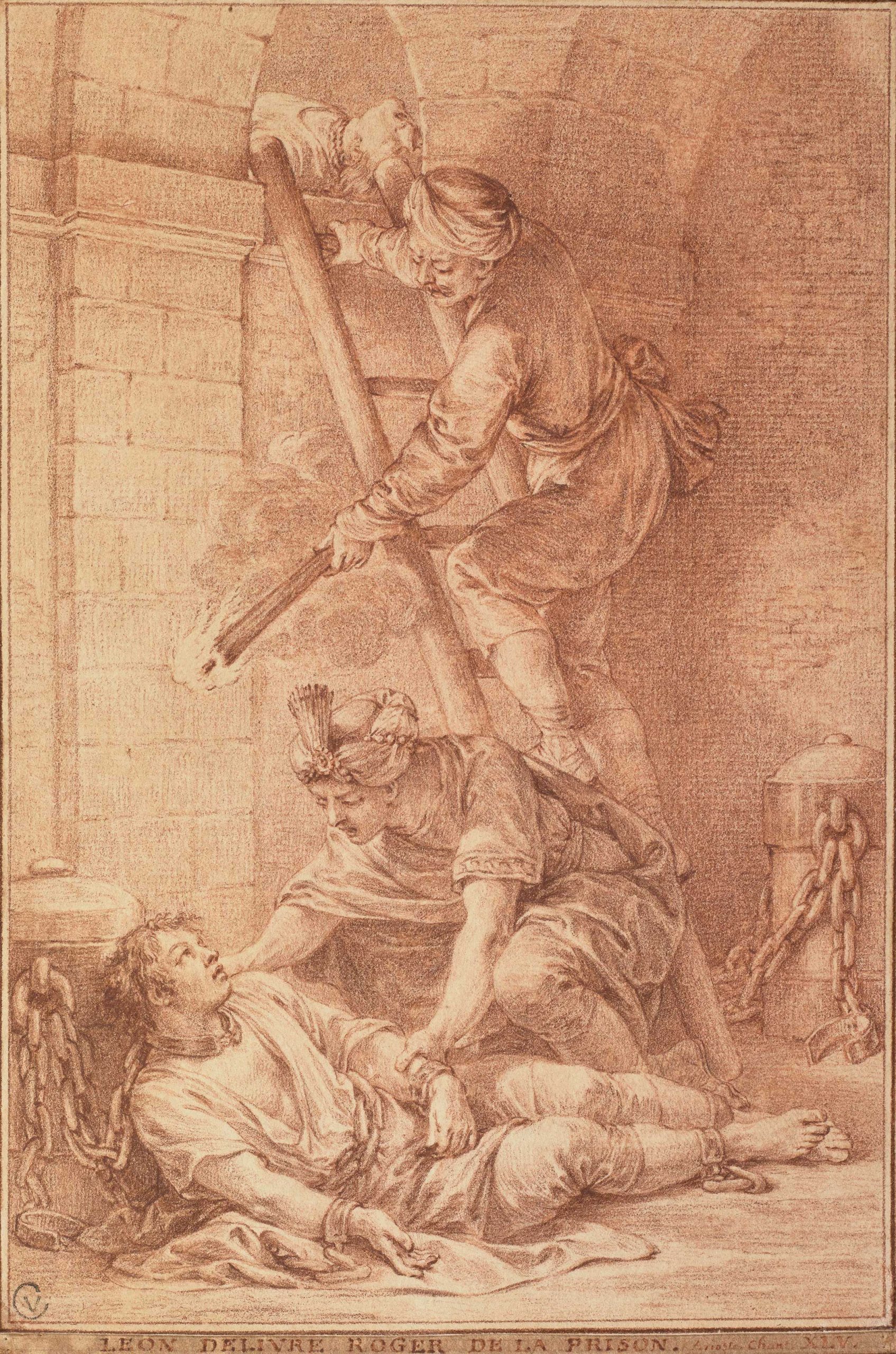 Son of the engravers Charles-Nicolas Cochin I and Louise-Magdelaine Hortemels (1688-1767), Cochin le Jeune became his parents’ pupil. He showed a remarkable gift for engraving and especially for etching, becoming one of the most adept masters in his field of the French school in the eighteenth century. Cochin worked after models by Italian masters as well as his fellow artists, such as Boucher and Vernet, both for his own pleasure and material profit. What interested him most, however, was the act of drawing, inventing his own compositions.

This sheet is the counterproof of a preparatory drawing to illustrate Ludovico Ariosto’s Orlando Furioso (1775-83). This epic poem, written in 1505 and first published in 1516, is composed of 46 cantos in ottava rima. It follows the war between Charlemagne and the Saracens who threatened to invade Europe. Léon délivrant Roger de la prison illustrates canto 45. Cochin illustrated 37 other cantos in this edition published by Brunet, other contributing artists included Jean-Baptiste Greuze, Jean-Michel Moreau le Jeune and Charles Eisen. The text was translated from the Italian by Louis Dussieux and it is possible that the Brunet edition was based on the one by Jean Baskerville, which probably was not illustrated. The drawings by Cochin date from between 1773 and 1777.

Cochin le Jeune was known to reserve the preparatory drawings to the engravings for the publishers. He took counterproofs of these preparatory drawings which he then re-worked to sell to collectors. He considered his re-worked counterproofs as more accomplished than his preparatory drawings, as they were in the same sense as the final print in the published work. As he mentioned in a letter to Desfriches on 1 March 1780: Il y aura dans cette suite deux frontispices allégoriques qui pourront faire tableau agréable. Je vous les conserveray, c’est à dire les contrépreuves redessinées qui ordinairement valent mieux que les premiers, surtout en ce qu’ils sont plus corrects. [‘In this suite there will be two allegorical frontispieces which can make agreeable illustrations. I will keep for you the re-worked counterproofs which usually are worth more than the first ones, particularly as they are more correct.’] (C. Michel, Charles-Nicolas Cochin et le livre illustré au XVIIIe siècle, 1987, p. 132).