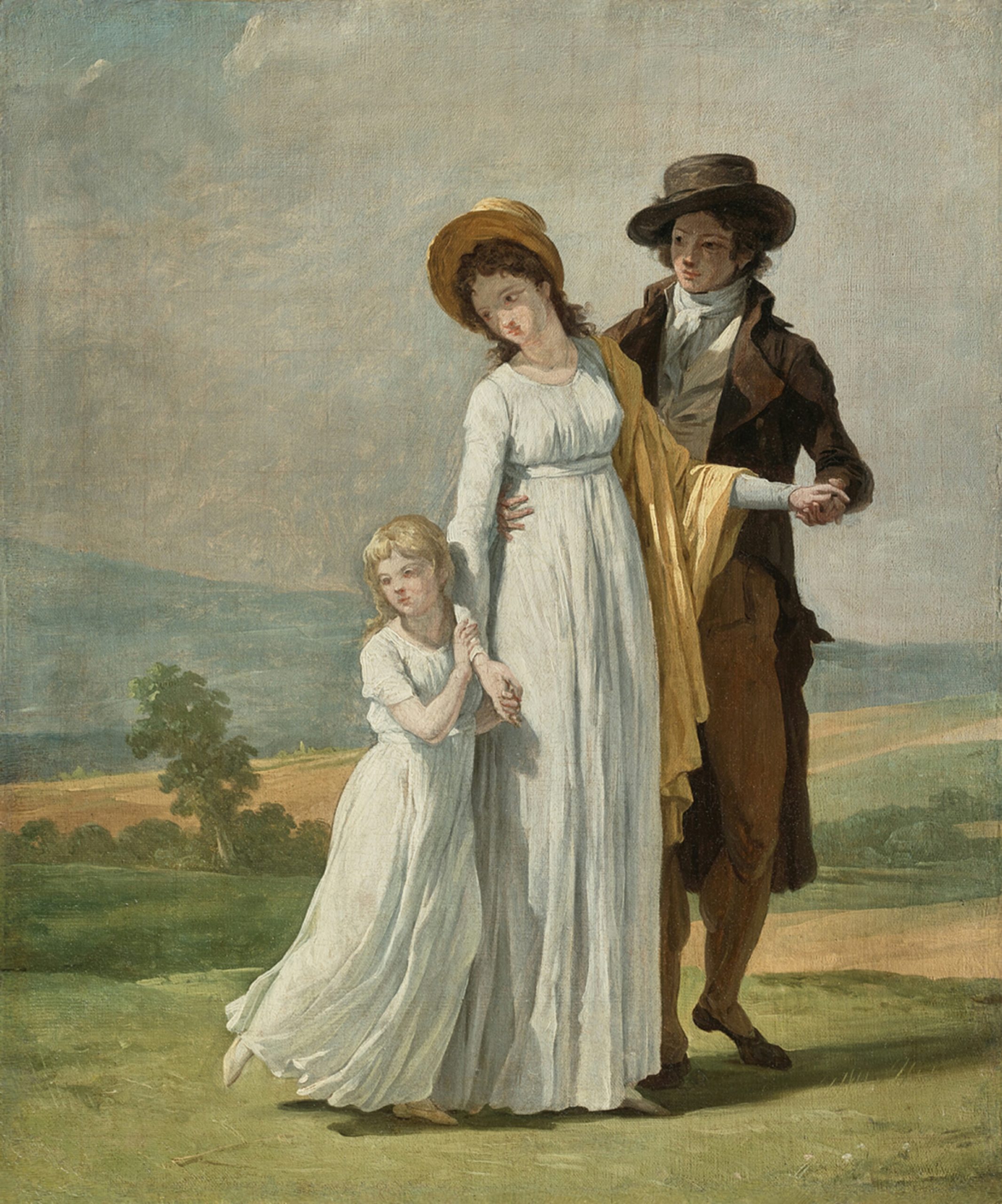 In the Musée des Beaux-Arts of Bordeaux

Anonymous sale, Paris, Galerie Georges Petit, 23 June 1922, lot 15 (as English School, late 18th century; “This painting could be attributed to J.-C. Ibbetson or to J.-R. Smith”); acquired at this sale, then handed down to François de Chasseloup Laubat by his grandmother Ernesta Louis Stern, deceased 7 May 1926; remaining in the family since then.

While treated as an independent painting, this charming sketch showing an elegant bourgeois family from the last years of the 18th century walking in the country is preparatory to the three figures in the middle ground of Agriculture by François-André Vincent (fig.a; Salon de 1798, Musée des Beaux-Arts of Bordeaux). This is the sketch mentioned by Jean-Pierre Cuzin in his catalogue raisonné of Vincent, recently published by éditions Arthéna, thought to have been lost, but still reproduced in black and white (549P, p. 214).

Presented by Vincent at the Salon of 1798, The Lesson in Agriculture is a complex work, one that can be situated between portrait, landscape, animal scene, genre scene and allegory. In this scene of sincere, robust  realism, the artist plays on the contrast between the refined but discreet air of the city dwellers and the rough muscularity of the peasant. Here is the condensed version of the art of Vincent, with its constant references to the Old Masters—the peasant’s gesture recalling that of Michel-Angelo’s Adam in the Sistine Chapel—and to Classical art, from which he borrows the posture of the Borghese gladiator for the figure of the boy from the city, as well as his interest in studies done d’après nature. This painting must have belonged to the series of four projects on the theme of the education of young people that included several other canvases: Commerce and  Soothe the Unfortunate were not painted, and Duty and Happiness was painted three years later. At the time of its presentation to the Salon of 1798, Vincent’s work was noticed by all the critics:  they were congratulatory about its pedagogical character—both moral and patriotic—and praised the mastery of the light that floods the scene.

Our sketch, painted in oil on canvas, shows a couple, parents of the young man being instructed by the vigorous peasant in the final painting, accompanied by a little blond girl. There are a certain number of differences between our sketch and the painting at the Musée de Bordeaux: the little girl is not looking at her mother, the mother’s hair is brown, whereas she became blond in the final composition, and the father, who is not wearing a hat, seems to be younger than in our canvas. The way the figures are dressed, and especially the long dress of the woman, the importance given to the landscape, and the delicacy and freedom of touch explain the erroneous attribution of our sketch to the English school when it was sold at the Galerie Georges Petit in 1922. This similarity with English painting is as an exception in French painting late in the 18th century, and bears witness to Vincent’s exceptional oddity.

If The Lesson in Agriculture is one of the most important works in the career of Vincent, it is also one  for which we have the most preparatory studies. Among them we would cite the very beautiful drawing setting out the overall composition in the Prat collection , the Head of a Peasant at the Musée de Lons-le-Saunier, and the famous sketch The Farmer and his Student at the Staatliche Kunsthalle in Karlsruhe