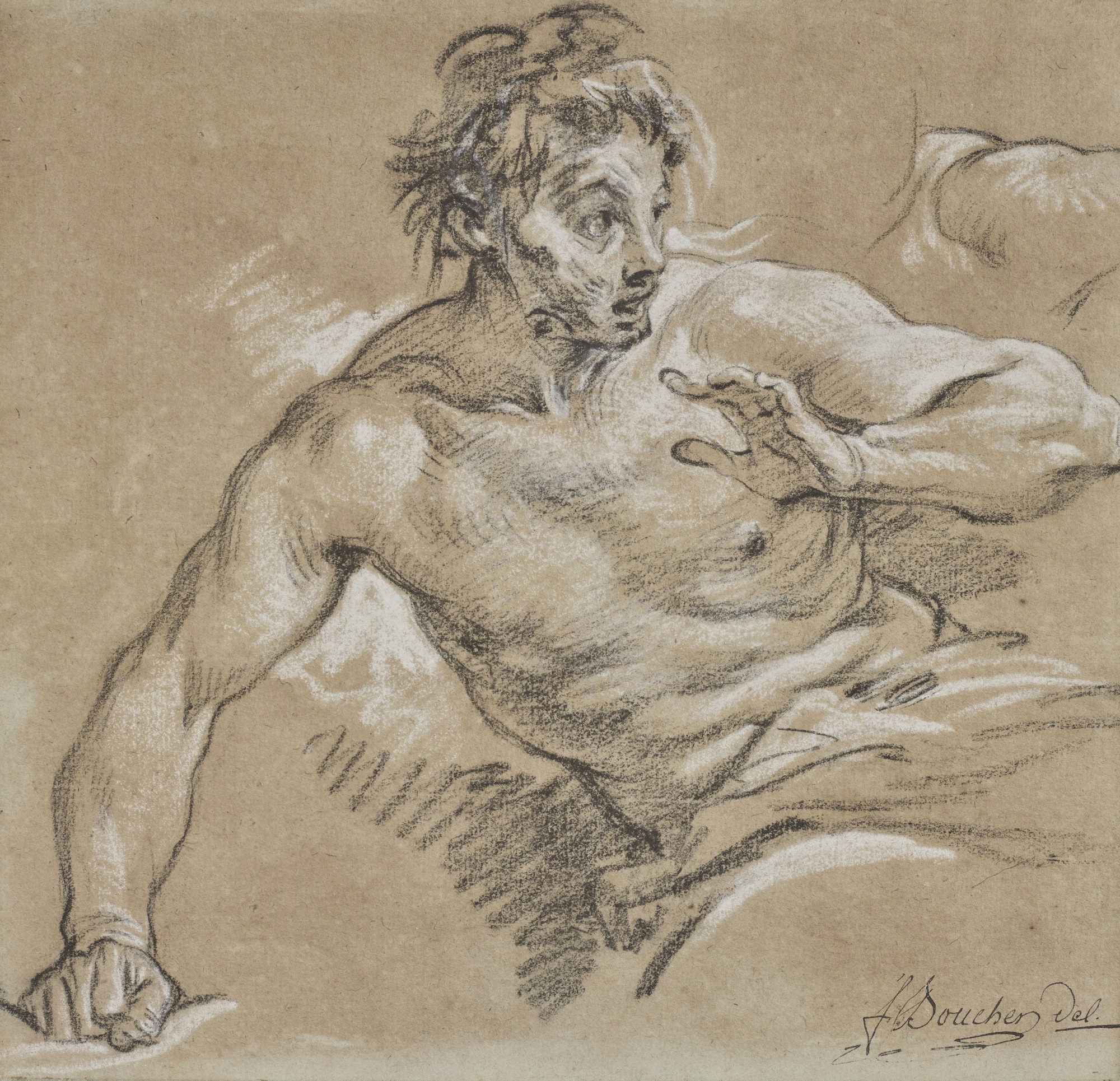 Study of Mars for Mars and Venus Surprised by Vulcan

Black chalk, white chalk, with highlights in pastel on beige, once greyish-blue, paper

As Alastair Laing points out, our work on paper is a perfect illustration of François Boucher’s drawing talents, his vigorous, expressive style, demonstrated by the dynamism of the surprise of Mars when discovered by Vulcan with Venus in his arms.

Our work is preparatory to a large painting, today in the  Wallace Collection in London (illus., no. 430 in the Ananoff catalogue). It was acquired by Lord Hertford in 1851 (Claude Pierre Prousteau de Montlouis sale, Paris, 5-6 May 1851, no. 10, for 10,600 francs), along with three other Boucher canvases, two of which, Venus in the House of Vulcan and The Judgement of Paris, were part of the same group as our work. The fourth canvas, Love Held Prisoner,  was not part of the original commission.

Boucher was requested to do the group of paintings by Claude’s father, Salomon Pierre Prousteau, member of the Paris bourgeoisie and former captain in the municipal guards. Apparently, the latter knew the First Painter of the King well, since, in addition to the the paintings in the Wallace Collection, he also possessed The Milliner and signed replicas of The Kidnapping of Europe and of Lunch. His inventory also included “Another painting depicting a design for the interior decoration of a salon, a painted sketch by Boucher,” which we imagine, as Alastair Laing underlines, represents a room whose principal décor would have been the three paintings in the  Wallace.

The reworking of Mars’ arm and the detail of his torso confirm that this is indeed a work done before the painting and not a commissioned replica done to satisfy a posteriori a collector of drawings.

A beautifully executed pastel drawing representing Venus, formerly in the Safra Collection, was also a preparatory drawing for the Wallace Collection painting.

We are grateful to Madame Françoise Joulie and Monsieur Alastair Laing for confirming the attribution of our drawing.