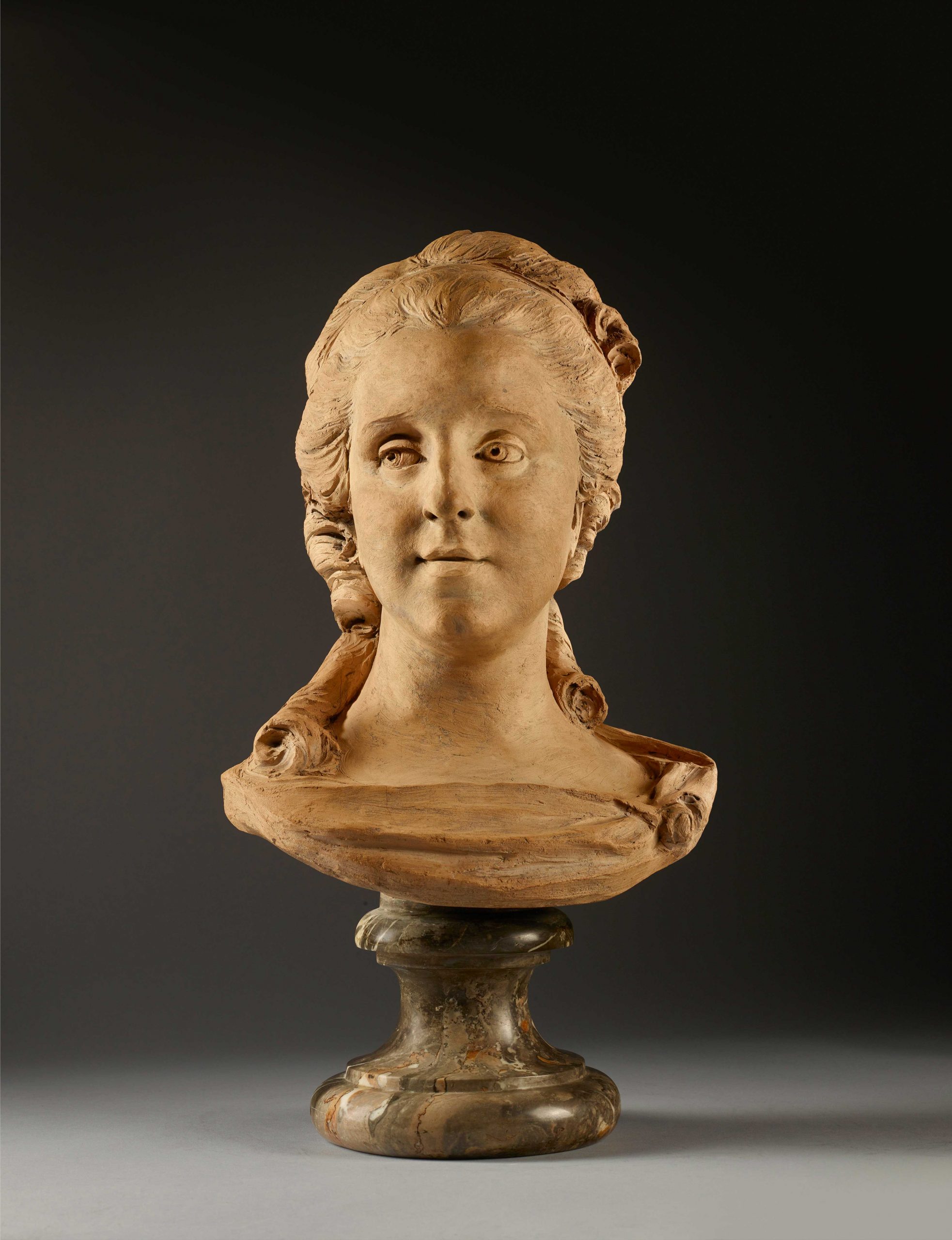 Born into a dynasty of artists including Simon Guillain, his paternal grandfather, his father, Jean-Louis, and his uncle Jean-Baptiste I, all important sculptors,  J.-B. II Lemoyne (Portrait by Maurice Quentin de La Tour, 1763, Musée du Louvre) quite naturally followed in the path of his elders.

Received as a member in 1744, he succeeded Boucher as Directeur de l’Académie in 1768. While his activity was clearly split between monumental and funerary sculpture—a subject largely developed by Dezallier d’Argenville in the article he devoted to the sculptor—and the art of the portrait, only the latter was worth the consideration of Diderot, to the exclusion of the grander genre if we judge by his comments on the Salon of 1765. “This artist does portraits well, this is his only merit. When he attempts a large something-or-other, you feel like his head doesn’t respond; he can thump his forehead as much as he likes, there’s no one home… Do portraits, M. Le Moyne, but leave the monuments where they are,” he wrote on the subject of the artist activity in his comments on the Salon of 1765.

By inheritance from the same collection as the recently rediscovered bust of Claude-Nicolas Le Cat (terra cotta. Signed and dated: par J.B. Lemoyne / 1743 /Claude. nls LeCat, private collection) (fig. b), this never before published portrait in terra cotta in all likelihood corresponds to the portrait of Madame Mazeline (Réau, Une dynastie de sculpteurs au XVIIIème siècle. Les Lemoyne, 1927, p. 152, no. 134 (fig. f)). Indeed, having been executed at the same time in the Norman capital, both of them totally disappeared and until now, no photo of either of them was known to exist.

Lemoyne did them in 1743, while he was waiting in Rouen for the bronze equestrian statue of the monarch to be loaded on board a ship for transport. In his Héloge de J. B. Lemoyne, Haillet de Couronne reports: “During his stay in Rouen, (Lemoine) sculpted the portrait of M. Le Cat and that of a lady of the city, Mme Mazeline, whose head later served him for the mausoleum of Cardinal Fleury.”

The portrait of Madame Mazeline presents all the characteristics distinctive to the art of Jean-Baptiste Lemoyne. Refusing to show his models straight on as was the custom, the sculptor posed his model with both her head and her eyes turned to the right, ignoring the viewer contemplating her, as is also the case with the Bust of a Man at the Metropolitan Museum of Art in New York (fig. d). Apart from the rather symbolic bit of drapery held by a clip indicating the bottom of the bust just at the beginning of the shoulders, Lemoyne avoided frivolous details to concentrate all of his attention on the general interiority and psychological introspection of the figure. Here we find his liking for—and mastery of—sculpting in clay, certainly his favorite means of expression and one that he communicated to his students, Caffiéri and Pajou. The work has a softness to it, as if it had been caressed, and thanks to a skillful rasping of the surface it gives an impression of living, breathing flesh through the interplay of shadow and light across the material. Its similarity to the art of pastel seems obvious, right down to the skillful neglect of certain areas.

His treatment of the expression and the eyes, their pupils hollowed out but also their shapes contoured with a vigorous, firm line is also characteristic of his manner, and can be found in the beautiful Bust of Madame Du Barry  in the Saint Louis Art Museum (fig. e), as well as in that of Mademoiselle Carroilhan de Vandeul (fig. g, Cleveland Museum of Art). “The material that he (the sculptor) uses seems, by its solidity and hardness, to exclude ideas of finesse and delicacy; the thought that goes into it needs to be simple, noble, strong and grand. I look at a painting; I must exchange with a statue,” added Diderot. Here, with this sculpted portrait, Lemoyne gives us a particularly brilliant illustration of the point.

We are grateful to Madame Cécile Champy-Vinas, a specialist on the artist, for confirming the attribution of our sculpture after inspecting it visually on 12 June 2019.