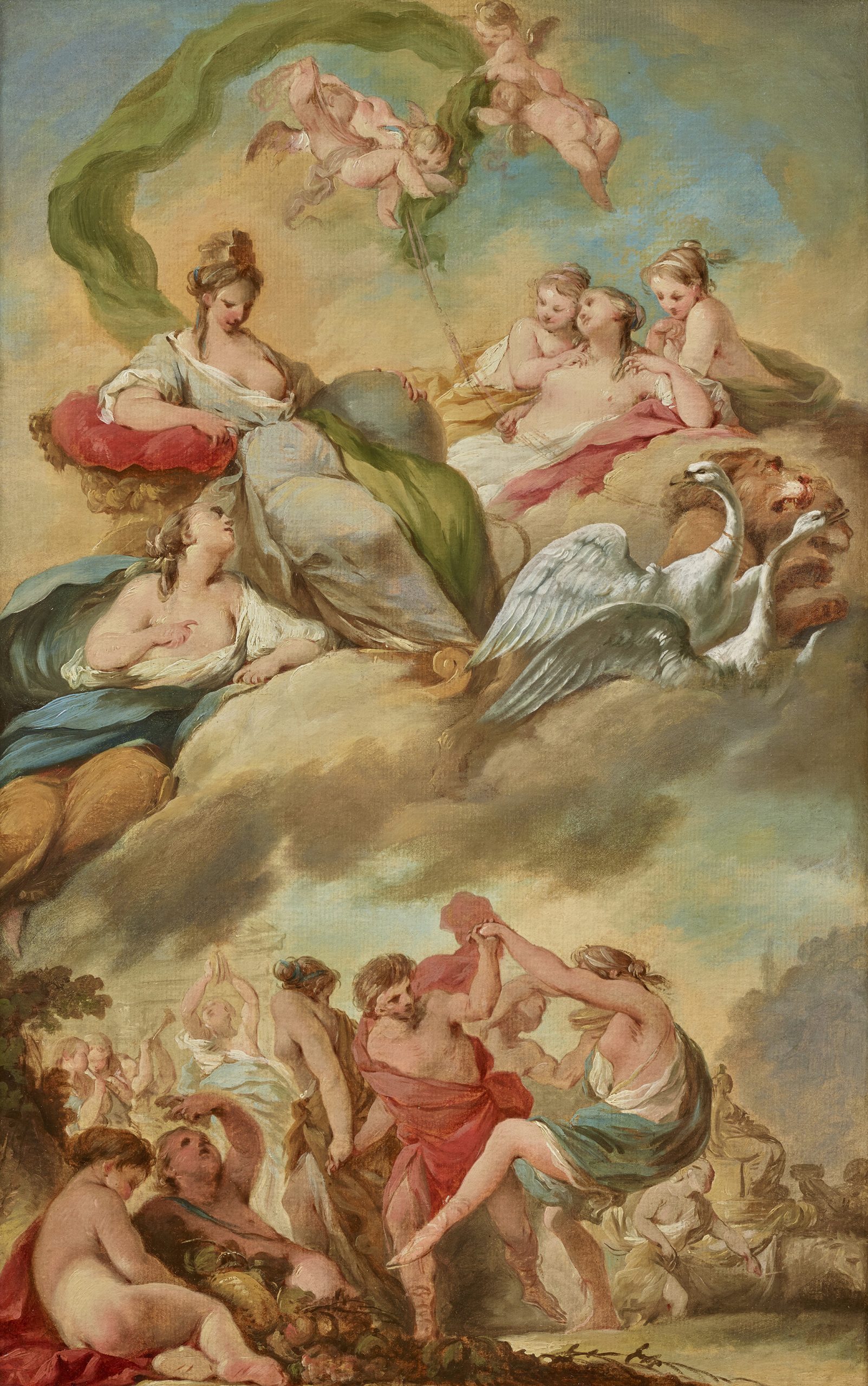 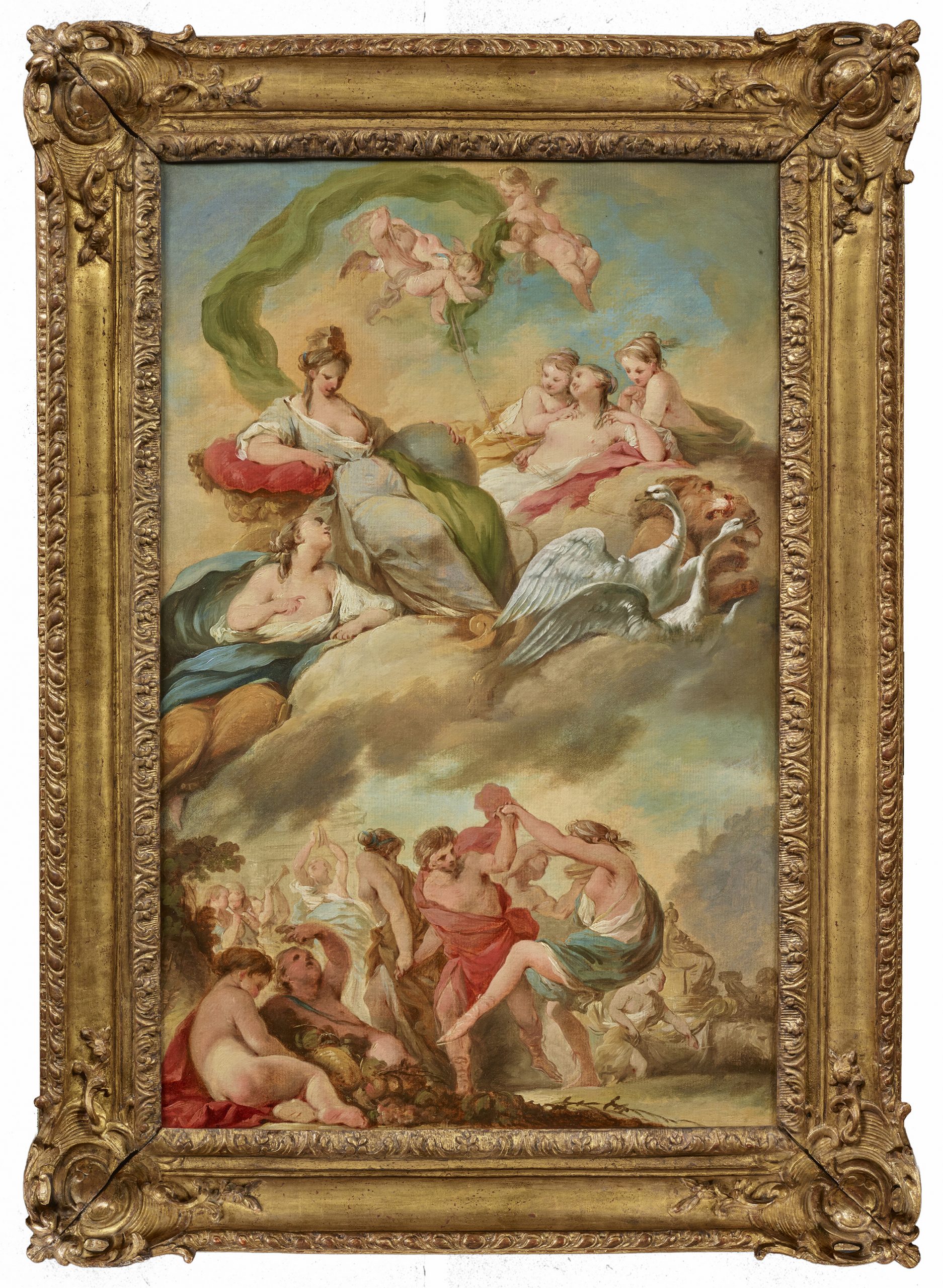 Sketch for the Allegory of the Earth

Oil on paper mounted on canvas

Preparatory study for the painting commissioned by Prince Paul-Antoine II Estheràzy, of which lower portion is in the Szépmûvészeti Múzeum in Budapest.

Our never-before-published sketch was preparatory to one of the largest group of paintings the fellows of the Académie de France in Rome in the mid-18th century had ever been commissioned to paint and probably  Barbault’s principal work in the Grand Genre.

In August 1752 Natoire informed Vandières, the new Directeur Général des Bâtiments du Roi, that Monsieur d’Arthenay, the French ambassador to the Court of Naples, had commissioned four large  paintings representing the Elements from the fellows at the Académie.

The magnificent patron behind the project was none other than Prince Paul-Antoine Estherazy (1711-1762), the fabulously rich  ambassador from the Queen of Hungary to Naples. In December 1752, the Princess, nee Maria-Anna Lunati-Visconti (1713-1782), on a visit to the Palazzo Mancini, was pleased “…to see that work had begun, with that of Mister La Traverse the most advanced of the three others.” According to Natoire, by September 1753, Barbault had finished his painting depicting  The Earth some time before.

The works, of ambitious dimensions (320 x 220 cm), were mounted in a décor of wood paneling at Eisenstadt, the vast palace where the prince held court. In 1820, they figured under the numbers 34-37 in the inventory of the Viennese palace of Nicolas Estherazy. Subsequently, they probably were sold when the collections of the Château de Pottendorf, another property belonging to the prince situated south of Vienna and not far from the Hungarian border, were dispersed on 24 June 1867.

While Air, which had passed by inheritance to the descendants of the Comtes Teleki de Szék, was bought by the Budapest museum in 1960, and Water joined it on the walls of the same museum in 1993, it was only in 2015 that the canvas by Barbault, most unfortunately in fragments, reappeared at a public sale in Hungary  (Nagyházi Galéria és Aukciósház, 15/12/2015, number 144).

Barbault chose to organize the lower part of this large painting in a spectacular, theatrical, way. Acting as a kind of foil, a satyr (Pan ?), lounges on an animal skin, flute in one hand and a bunch of grapes pressed in the other, while a figure just out of view brandishes a basket of fruit overhead. Nymphs and shepherds dance in a circle, a grouping that Bouchardon would have been happy to claim for his Lupercalia Festival, while a bull about to be sacrificed on an altar finishes off the skillfully tiered  composition.

In our sketch, the painter placed the group of dancers at the center of the scene, with children, leaning against a grassy knoll as they gather the fruit produced by Earth, the Mother Nature that replaces the satyr. The temple and scene of sacrifice is rendered in a range of muted tones and light brushstrokes, in the background.

In the large composition which reappeared in 2015, only four fragments remain, with many elements of the upper register missing, meaning that our sketch is the only way of imagining precisely how the scene was laid out. The scene plays out around a chariot imagined as a sort of throne, richly decorated and drawn by a fantastical team of swans and lions, symbols of strength (and probably possible alternatives) carrying Cybele, divinity of Phrygian origin, personifying both the savageness of nature and  reproduction. She wears a crown of walls, representing the cities that she protects, and holds a terrestrial globe. Female figures, denuded and lascivious, probably representing the seasons, rest on clouds pierced by warm light, while putti seem to be arguing over the long stole worn by Cybele.

The effrontery and the Mannerist charm of the willowy silhouettes typical of Barbault, can be seen with brilliance in his sketch. The artist shared this very singular style with a current of French 18th century art: French artists who were Piranesi enthusiasts and active at the heart of the Académie de France in Rome in the 1740s, like Hutin, Hallé and Le Lorrain. A certain air of the Chinea painted by the latter finds an echo here: a composition distributing numerous figures in tiers, and their bold, swaying poses  recall the  1744 work.Here also one can only admire, as emphasized by Pierre Rosenberg “ …his unequaled skill as a colorist, one who enjoys mixing golds and violets, olive greens and blacks with the delicacy of a great artist.”

The style of our rare work—more a first conception than a modello, since its differences with the finished composition are so numerous—is also remarkable and representative of the artist. Pierre Rosenberg enumerates some of its characteristics: “the sureness of the brushwork, its rapid, unctuous touch” and “his preference for a finish that is that of porcelain, enameled and creamy” found in the paint layering and rapidly applied glazing of our sketch.

Dominique Jacquot referred to three works that conferred on Barbault a place apart in the painting of his time: Masquerade in Besançon, Buffalo in Strasbourg and  Italian Festival. Perhaps today it would be fitting to add a fourth, our Allegory of the Earth which, as it is the only confirmed draft for the work by this deeply original artist, has shed new light on the work?

Biography: A pupil of Jean Restout, Barbault competed for the Prix de Rome in 1745, but it was finally at his own expense that he went to Italy, in 1747. De Troy, the then director of the Académie de France, singled out the young artist and two years later, allowed him to become a fellow at the Palazzo Mancini.The replacement of Jean-François de Troy by Natoire, and Barbault’s subsequent marriage, an infringement of the rules of the Académie (“…he made the stupid mistake of getting married secretly, to poverty,” according to Natoire), led to his being dismissed in 1753. The young artist decided, however, to remain in Rome, where he remained throughout his career. An artist of multiple talents, Barbault made more than 500 engravings, all greatly influenced by the work of Piranesi, with whom he worked. He participated in several large-scale projects of the period, Varie Vedute di Roma Antica e Moderna, Antichità Romane, then in 1761 Les Plus beaux Monuments de la Rome Ancienne.His paintings are much rarer than his prints, and rather frequently misattributed. A certain number of his canvases were identified as being by Italian or Spanish artists. Today, Barbault’s name cannot be dissociated from the series of paintings commissioned by Jean-François de Troy as a souvenir of The Sultan’s Caravane to Mecca, the large Turkish masquerade held by Académie fellows in 1748. Split up at the time of the Julienne sale in 1767, some of them disappeared, others are in the Musée du Louvre (Greek Sultana and Priest of the Law), at the Fondazione Cini in Venice, and the Musée Départemental in Beauvais (Emir Bachi and The Persian Ambassador).His most famous work, the monumental Masquerade of the Four Parts of the World in the Marquis de Breteuil’s collection, is today in the Musée de Besançon