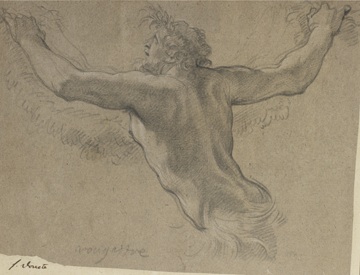 Born in 1617 in Saint-Quentin, Michel Dorigny entered an apprenticeship with Georges Lallemant in 1630, before becoming a student of Simon Vouet and principal engraver of his work. He was admitted to the Académie Royale de Peinture et de Sculpture in 1663.

Dorigny completed a number of decorative schemes and holds a prominent position in the history of decorative painting in mid-seventeenth-century Paris.

This sheet is probably a preparatiry study for a mythological scene that would have been realised either as a fresco , decorative panel or easel painting. Like his master, Dorigny, produced many detail studies on paper for his ambitious compositions. Whilst in a similar style and using the same technique, this work differs from that of his master in that it is characterised by a greater firmness, the treatment of the lines are more precise, and the contours more defined.