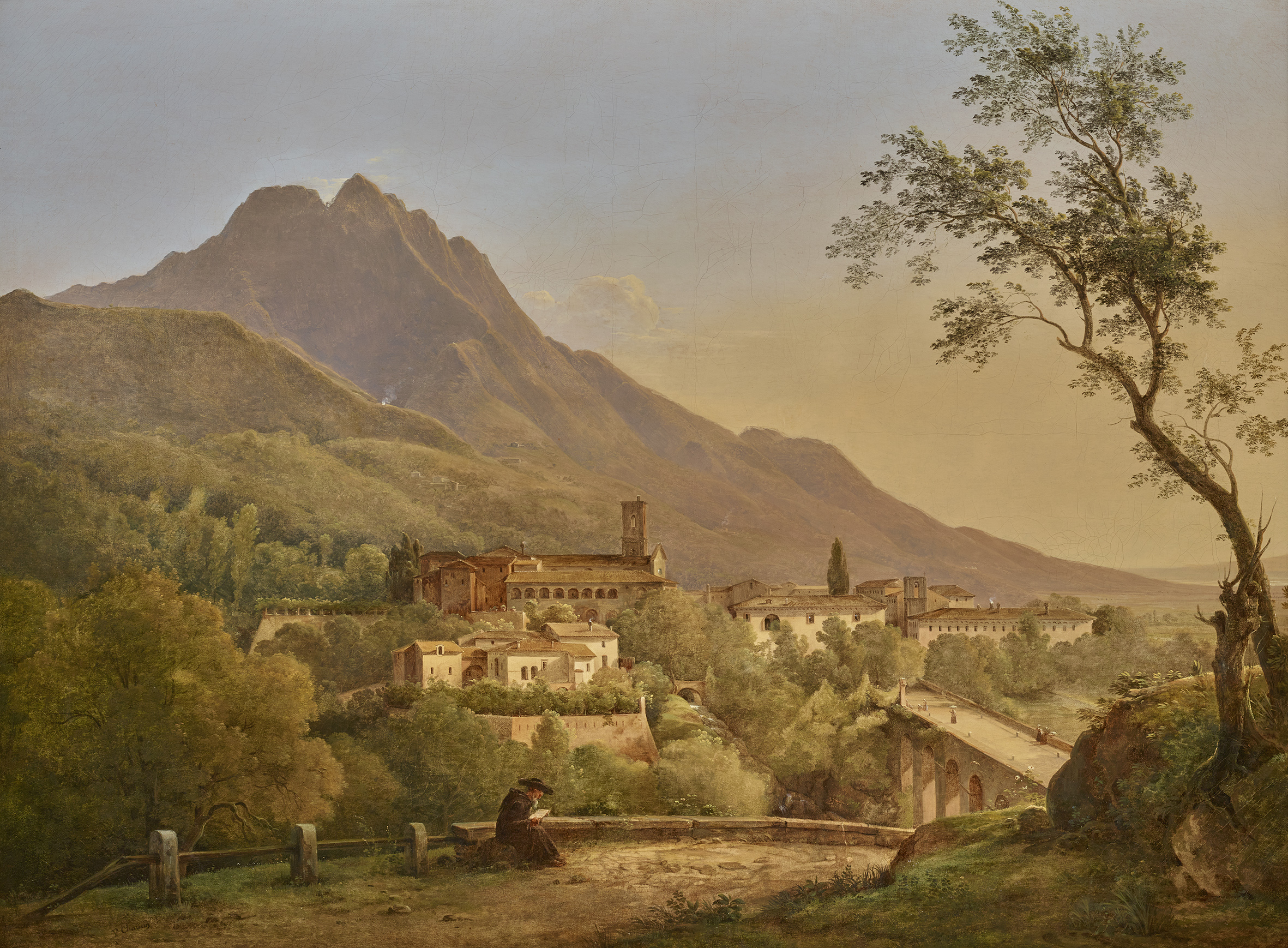 View of the Small Town of La Cava, in the Kingdom of Naples,

Seen from the Salerno Side

Pierre-Athanase Chauvin, from a Parisian of modest means, spent the years between 1795 and 1800 in the studio of Pierre-Henri de Valenciennes (author of the famous treatise on perspective for the use of landscape painters published in 1799[1]) to study the use of perspective in landscape. Thus his early career is principally known for historical landscapes. In 1802, Chauvin left for Italy with one of his writer friends, Jourdan (Journal des Débats), drawing the countryside of Rome and Naples and their surroundings. Two years later, Chauvin moved permanently to Rome.

Paul Marmottan was the first to quote the letter from Talleyrand to Chauvin, dated from 30 Fructidor in Year XIII (15 Sept 1805) proposing his patronage, “do not worry, Monsieur, about either the present nor the future.” This conjunction allowed the artist to pursue his studies in Rome and insured him financial ease in exchange for a yearly contribution of two landscapes. His submissions to the Salon over the first years were intermittent, in 1793, 1796 and 1801. He continued however, to send his work from Rome to the Paris Salon until 1831. In Rome, he became friends with a few artists, including Pierre-Narcisse Guérin, the landscapists Boguet (the Elder), Fabre, Bodinier and Granet, but was also a witness at the wedding of Ingres in 1813, with this latter painting a portrait of the artist as well as one of his wife.

The study of Chauvin done in 1977 by Marie-Madeleine Aubrun remains the only biography of the artist up to now. The lack of information about his beginnings as an artist in Paris, the missing letters from his correspondence with his patron, Talleyrand, and the absence up until now of an inventory after his death are hardly favorable to establishing a catalogue of his painted works.

The repetition of the sites he painted after nature in no way facilitates the establishment of a coherent provenance for each of them. For example, there are three versions of The Valley of Narni with the Ruins of the Augustus Bridge, including a lost one that was exhibited at the  Salon de 1827. This is true as well for our painting of La Cava of which we are aware of two other versions. If we consider that two works per year were sent to Talleyrand from 1802 until the artist’s death in 1832, this should result in around 60 landscapes… What happened to them? Were they sold in his lifetime, as seems to be the case for the View of the Ruffinella purchased in 1824 by the State for 1500 francs for the collections of Charles X? Nothing to date in the Talleyrand de Valençay et de Sagan Archives provides us with information on their condition or even the location of Chauvin’s paintings when the duke died in 1838. With no direct heirs, did the duke arrange for his favorite niece, the Duchesse de Dino to inherit? Born Dorothée de Courlande, she was the wife of his nephew, Alexandre-Edmond Talleyrand. Napoléon-Louis de Talleyrand (grand-nephew) inherited the Château de Valencay at his succession, but there were only six works by Chauvin that turned up at the sale organized by the Galerie Georges Petit in 1899. Of the three known versions of La Cava, only the one presented by the London dealer Hazlitt is dated: 1810. It is difficult today to affirm at present that this version did indeed belong to the Duc de Talleyrand.

he present painting shows the town of La Cava in Campania with the Abbey of the Holy Trinity, the Casa Maria Convent and the Church of Saint Francis and Saint Anthony, as seen from the road from Salerno with, high in the background of the  composition, Monte Finestra, reaching to height of 1,138 m.

The site of La Cava was painted by other artists close to Chauvin: to cite only the most famous, Bidauld, Boisselier, and Brascassat, all rendering the spot with the refinement that characterizes their work