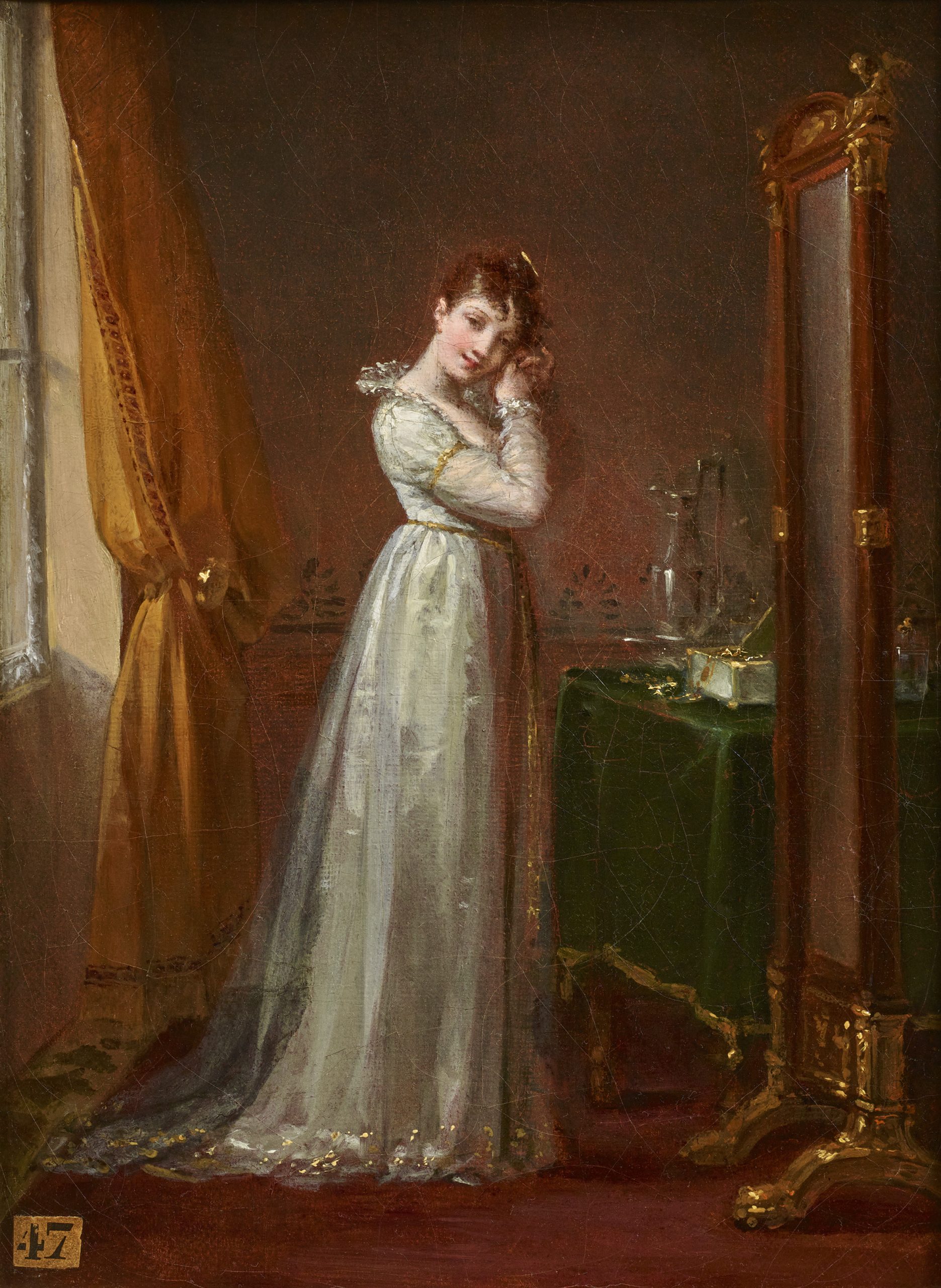 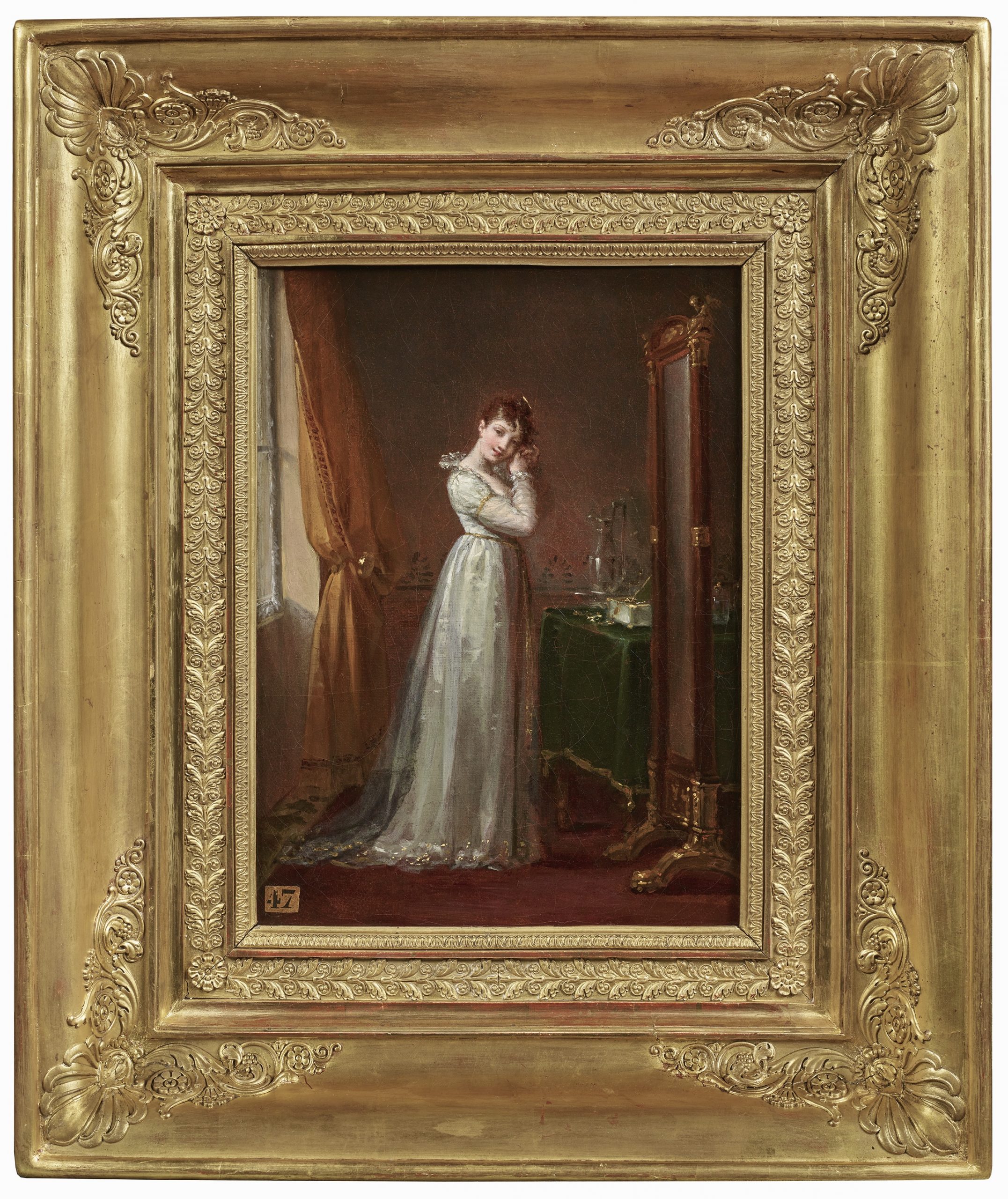 Prud’hon began his career at the Académie de Dijon, at that time directed by Devosge, and then left for that of Paris, where he spent for four years. In 1784 he returned to Dijon to enter the Etats de Bourgogne competition, winning first prize. He afterwards moved to Italy where he studied the Old Masters and discovered Correggio, whose work influenced him so deeply that he became known as the “French Correggio”. In 1758 Monsieur de Lannoy commissioned him to decorate his mansion,  the Hôtel St Julien: the work he did there was so greatly admired that it caused some of his fellow painters to be quite jealous.

During the Empire, Prud’hon was at his most prosperous.  A large allegorical drawing Peace or the Triumph of Bonaparte, Premier Consul (Chantilly, Musée Condée), was exhibited at the Salon in 1801, one of the first works he did glorifying Napoleon. He was then given many official commissions, among them the Full-length Portrait of the Empress Josephine, (1805, Musée du Louvre).  In 1808, Prud’hon received the Cross of the Legion d’Honneur for Justice and Divine Vengeance Pursuing Crime (Musée du Louvre). Thanks to the backing of the Comte Frochot, Préfet de la Seine, Prud’hon was chosen as the official designer for the sumptuous festivities on June 10th 1810 to celebrate the marriage of Napoleon I to Marie Louise, which had taken place on April 1st of that year.

Our small painting, lithographed by Maurin with the title “La toilette” should be compared with the full-length portrait of Mme B*** (possibly Madame de Beaulieu, a friend of the artist?), exhibited by Constance Mayer at the Salon of 1806, no. 376. Presented as a self-portrait by Constance Mayer when it was sold in the Lelong sale (Paris, Galerie Georges Petit, 11-15 May 1903, no. 537), this oil on canvas with its rather large dimensions (81 x 64 cm) seems, as Sylvain Laveissière emphasizes, to have a facture that is “somewhat dry”.

Several drawings done by Prud’hon were preparatory to this painting, which was executed by the woman who was his pupil, his muse and his mistress all in one: a study in pastel for the face of the model (Louvre inv. 32586, fig.a), a study for the cheval glass (formerly at Seligman), and still another for the curtain (Louvre, RF11696).

The relationship of the couple has been spoken of “two artists in symbiosis”, one that the tragic suicide of Constance Mayer brought to an end in 1821. They elaborated numerous compositions together, with Prud’hon doing the drawings, or as is the case for our canvas, the sketches, for works which his companion executed in full scale, signed and exhibited under her name at the Salon (for example, Contempt for Wealth, The Flaming Torch of Venus and Dream of Happiness).

For her part, Constance Mayer, his “loving and wise friend”, furthered the career of her master, obtaining the commissions for the different portraits of Talleyrand for him. She also often gave him judicious advice, as in the case of  Divine Justice and Vengeance, which she convinced Prud’hon to modify.

The spontaneous, natural pose of the model, as well as the feeling of intimacy that emanates from the scene make our painting a marvelous snapshot of the art of living in the early 19th century. The cheval glass, a full-length mirror that had just come into fashion, is very avant-garde in its draftsmanship, evoking the designs of the cabinetmaker Lignereux. A silver ewer and a porcelain box with metal mounts are on the table covered with a velvet cloth, completing the refined furnishings of this dressing room.

Having examined the painting, Monsieur Sylvain Laveissière has confirmed its attribution.