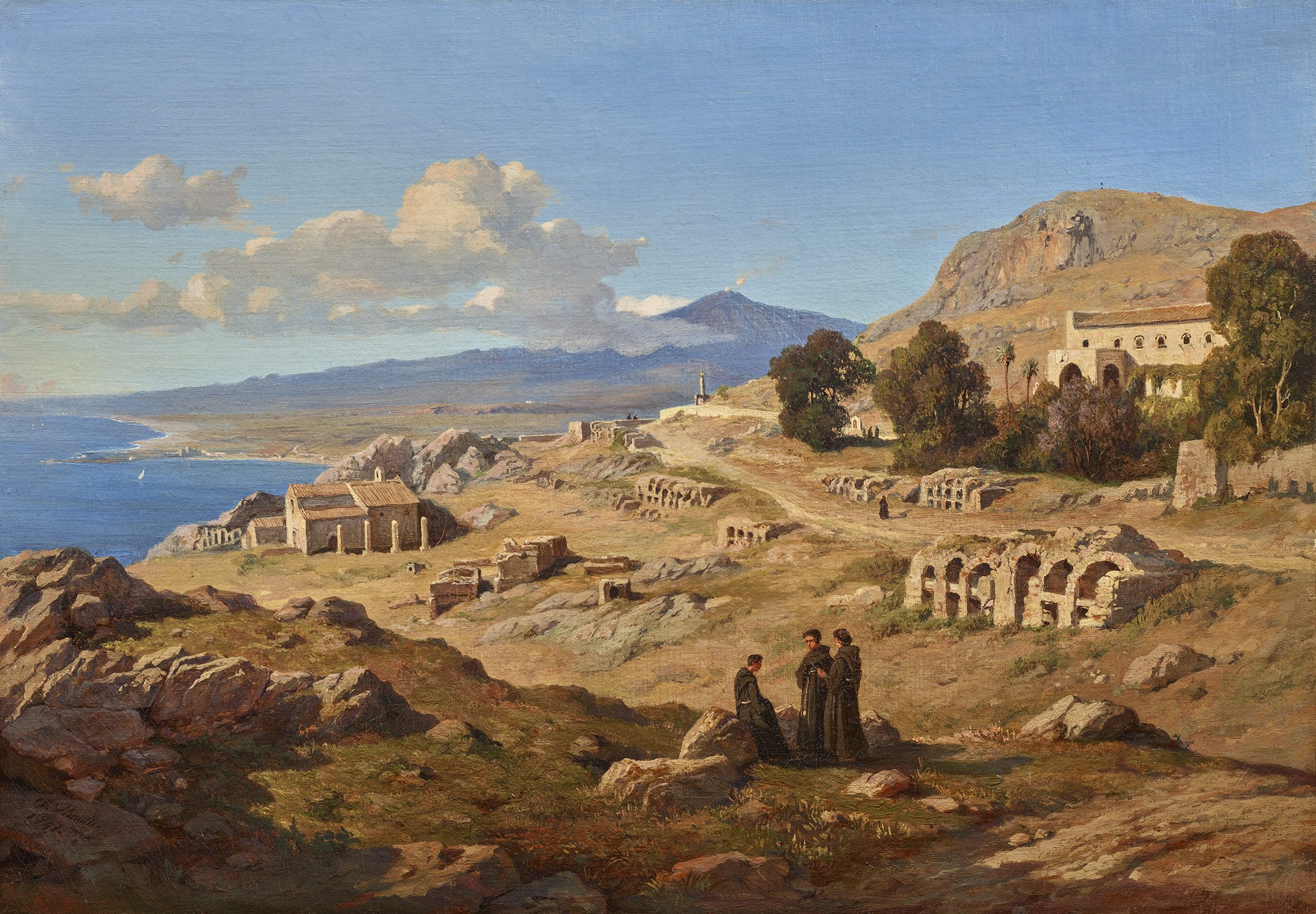 Road Along the Tombs at Taormina

The 1830s marked a change in the art of landscape in France. A number of young artists, working on the fringes of the Romantic movement, rejected the classical models of landscapes extolled by the Académie. Sometimes inspired by Claude or Poussin—here, a group of figures; there, an element in the composition or the particular lighting of a scene—Thuillier anchored his realistic scenes in the great French tradition, but without sacrificing their most modern qualities.

After studying to be a notary, Thuillier decided to dedicate himself to painting, joining Watelet’s studio in 1825. It was there that he met Théodore Caruelle d’Aligny, with whom he would later travel to Italy. He began painting views of his  region, as well as numerous landscapes of the forest of Fontainebleau, exhibiting in Amiens as of 1827. After a stint in Gudin’s studio, this very independent personality chose to settle in Paris, painting scenes all over the Paris region and Normandy, before indulging in his love of  travel and spending the 1830s on the road, in particular in Germany (1833), England (1834), Belgium and  Holland (1835-36), with very little time spent in his Parisian studio on the Rue de Vaugirard (number 22). Having traveled over Italy in the early 1840s, Thuillier left for North Africa, visiting Algeria and Egypt, and returning with orientalist landscapes that recall the work of Prosper Marilhat.

From 1831 to 1857, Thuillier regularly exhibited at the Salon and enjoyed critical success, the critics appreciating not only his naturalist approach to the sites, but also his particularly delicate lighting effects. He won prizes four times, notably a First Class Gold medal at the Salon of 1839 for The Château de Rochechinard.Encouraged by his numerous successes, Thuillier left for Italy, bringing back views of Naples, and Tivoli, but above all of Sicily, of which there were no fewer than seven in the sale which took place after his death, including our painting (no. 36 in the catalogue), as well as the magnificent View of the Theatre at Taormina (Musée de Picardie, Amiens).  A Landscape of the Palazzo della Badia, also dates from this trip (  whereabouts unknown).

Taormina was the capital of Byzantine Sicily, which ended, in fact, with the fall of the town in 902. Moslem domination lasted until the arrival of the Normans, in 1061. Numerous vestiges from many periods—Antiquity, Byzantine and Medieval—can be found scattered over the landscape. They exercised the same fascination for everyone: simple tourists, painters and writers. The Greek theater was the site most often represented; the road along the tombs attracted artists’ attention less, even though it also offered a majestic view dominating Etna.

At this grandiose site, dominated by the silhouette of the volcano, our composition uses the fifty or so Byzantine tombs surrounded by thick walls along the Via Pirandello (ill. 5) as its setting. Situated below the city, they became buried under layers of earth in the 19th century, and were only recently rediscovered during road works, in 1996.

When Thuillier exhibited his views of Taormina at the Salon of 1843 (ill. 6), he was warmly received by the critics: “M. Thuillier has depicted heat without too much violence, brilliance without exaggeration. A splendid sun illuminates all of his paintings, Palermo, The Ancient Tiburtina Road; Road Along the Tombs and Taormina. Brilliant lighting of the hills, solid parcels of earth, the warm harmony that reigns between the indigo sea, the azure sky, the violet hills, (and) the bright skies, and in two of these paintings, a great severity of line, attest to the artist’s exceptional level of skill, one that will make these brilliant qualities, serious qualities as well.” (Salon 1843, collection des principaux ouvrages exposés au Louvre…, text by Wilhelm Ténint, p. 40).

While our Road Along the Tombs can be distinguished from the Amiens painting by the cold light of the morning that characterizes it; there is also the group of three individuals talking, an element very dear to the artist and also present in the foreground of Landscape of the Palazzo della Badia